Sepia Saturday : The Gaiety Girl And The Sixpenny Signature 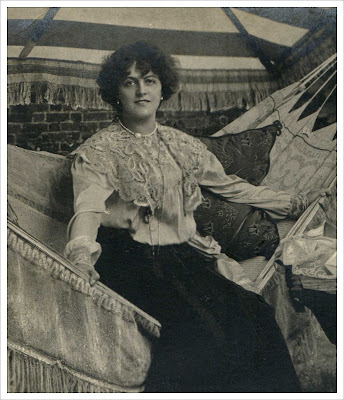 My picture this week is of the musical comedy actress Marie Studholme who was born in 1872 a few miles away from here in Bradford. She was educated at the Salt Grammar School in Saltaire (see Jennyfreckles' splendid Saltaire Daily Photo Blog for more information about this fascinating World Heritage Site) but eventually moved to London were she went on the stage in 1891. She was signed up by the theatre manager George Edwardes to become one of his "Gaiety Girls" and quickly rose through the ranks of the chorus to take the lead in the 1894 show "A Gaiety Girl" at Daly's Theatre in London. Later she starred in a host of West End stage shows and also worked on Broadway and toured throughout the United States. One of the final performances of her stage career came in 1914 when she returned to her native Bradford in triumph and appeared at the opening of the new Alhambra Theatre. She eventually retired from the stage in 1915 but lived an active retirement until her death in 1930. 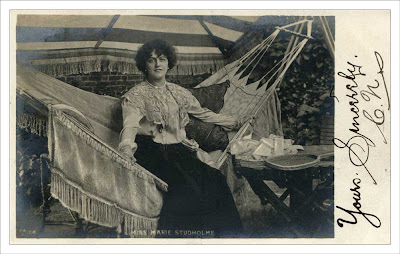 Her fame coincided with the height of the picture postcard craze of the first decade of the twentieth century and she became one of the most photographed women of her time. My image of her comes from a postcard which was in the collection of Fowler Beanland. Throughout her life, Marie Studholme was a lover of animals and a keen supporter of animal charities. It is said that she would charge sixpence to sign picture postcards of herself and give the money to a variety of animal charities. As you can see, Great Uncle Fowler was a Yorkshire man through and through, and must have demurred at the thought of paying sixpence for such a signature so got someone with the initials CH (or possibly CN) to sign it instead. But remember, Marie was born and raised in Bradford, so she would have been used to such parsimony.
You don't need to be parsimonious with your Sepia Saturday reading, there are no charges involved. Just pop on over to the Sepia Saturday Blog and follow the links.
at October 08, 2010