Postcards From The Pond 7 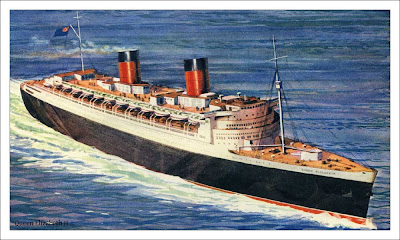 There is an old Billie Holiday song called “I Didn’t Know What Time It Was” and I have to say that I know how she felt. For the last few days we have been adding an extra hour to our clocks every night (a rather pleasant experience which I can highly recommend) but the result is that ones’ natural sense of time feels somewhat assaulted. The situation is not helped by the fact that every clock on the ship seems to tell a different time. There is a television channel which constantly provides key information such as wind speed, the height of waves and official ship’s time. When I awoke this morning and checked I became convinced that it was an hour fast and I eventually phoned Reception and asked the comparatively simple question “Could you tell me what time it is please”.  My confidence was slightly shaken by the response “Hang on a minute, I’ll ask someone else”, but when he came back he eventually confirmed my interpretation of the time. “You do know that your official ships’ time is an hour out“, I said. “Oh, is it”, he replied with a lack of concern that was either strangely comforting or verging on the terrifying.

I acknowledge that navigational technology had advanced over recent years, but I come from an age where the possession of an accurate chronometer and a knowledge of planetary positions was the essential ingredients of knowing where you were when you were afloat on any body of water larger than Shibden Park Lake. My confidence was momentarily restored when I noticed that today’s programme of lectures included an illustrated talk on the planets of the solar system, but my renewed confidence was once again threatened when I saw that the lecture was being delivered by the hip’s Entertainment Officer, Mr Leon De Ste Croix.

On top of all this, each morning you receive a little informative message from the ship’s captain on your personalised in-cabin TV console thingy. These usually tell you titbits of information such as which side of the ship is port and which way you are facing when you emerge from any lift. This morning’s message extolled the virtues of the ship’s radar system, saying how it could be used to easily recognise land and other nearby ships. It then included the alarming sentence (and I quote in full) “the system, however, will not detect underwater objects such as submarines”!!!!. I think I will phobe reception back and seek further clarification : can it for example detect icebergs?  I suspect I know the response I will get : “Hang on a minute, I’ll ask someone else”

Wherever we are and whenever it may be, we are all well and looking forward to another day of almost uninterrupted eating, drinking, partying and snoozing. Hopefully I will be able to fit an hour or two of writing in there : only three days left before we (hopefully) make landfall in the Virgin Islands, and there will be little time for writing after that.

Ah well, as the Devine Billie used to sing : “I’m wise, and I know what time it is now”
AB