Sepia Saturday 69 : From Mabel With Love 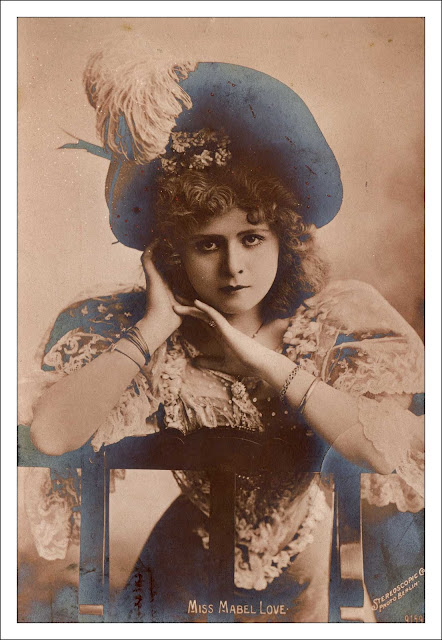 We tend to think of "celebrity culture" - and all the tissue-paper thin emotions and over-dramatic excesses which accompany it - as a recent phenomenon. But as any self-respecting elephant will tell you, few things are new in this world of ours. Step forward into the sepia limelight Miss Mabel Love.
Born in the English seaside resort of Folkestone in 1874 and coming from a family of stage and music hall entertainers, Mabel Love - her real name was Mabel Watson - first appeared on stage at the tender age of twelve. She was regarded as one of the great beauties of the later Victorian age and her fame coincided with the growing popularity of picture postcards. The widespread circulation of postcards such as the one above, which is from my own collection, was perhaps the first manifestation of the type of celebrity worship that we are all too familiar with today. In 1894, the twenty year old Winston Churchill wrote to Mabel pleading for a signed photograph.
But the fevered lifestyle of a celebrity star had its own pressures even in the Victorian age and in March 1889 the newspapers of the day were full of headlines reporting Mabel's disappearance. It later emerged that she had gone to the Thames Embankment in London in order to commit suicide - but like most good celebrities had eventually decided against it.
Mabel kept working on the stage (and appeared in an early 1917 film "In Another Girls' Shoes") until 1918 when she retired and later opened a dance school in London, But today she is perhaps best known because of those early postcard photographs of her which have become firm favourites with many postcard collectors.
To see other contributions to this week's Sepia Saturday go over to the Sepia Saturday Blog and follow the links.