Swimming In The Footsteps Of Charlotte Brontë

It is less than ten weeks until our holidays. Whilst the prospect of sitting in a steamer chair on a very large cruise ship heading for the Canary Islands is an attractive one, the thought of several layers of my fat stomach hanging over the side of the same steamer chair is not. A pre-holiday diet is called for.
So, for the last eight days and nine and a bit hours, I have been eating only things which are so unpleasant that (a) they must be good for you; and (b) they can't have many calories in them (this is based on the theory that it is the calories that make things taste nice). A second part of this distasteful regime is exercise. The only kind of exercise I can face without going weak at the knees through exertion and week in the head through boredom is swimming. So yesterday, the entire family re-joined the local Holiday Inn Spa for a nice limited period which will take us up until we go off on holiday. 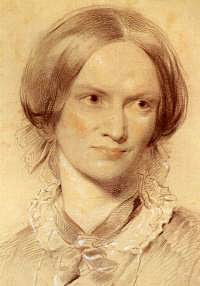 I have been a member there several times before and I am used to the pool and used to swimming all those repetitive lengths. But, I have to admit, it is very pleasant to relax in the jacuzzi after swimming the required 37 miles (well it feels like that) and look through the large picture windows at the Calder Valley. If you look to the west you can see up the valley to the moors beyond Halifax. If you look east you can see down the valley towards Mirfield. I have often thought that Charlotte Brontë must have often passed this spot as she walked from Roe Head School (which she both attended and taught at and is only a mile or so from the Holiday Inn) home to Haworth (which is on the moors just beyond Halifax).
Last night I sat in the warm, bubbling water of the jacuzzi, looking down the valley to the old road where Charlotte would have walked. It was approaching dusk. The steam from the hot pool was misting the windows. And there was Charlotte, walking along, deep in thought, heading home to visit the Haworth Parsonage and her family. It is extraordinary what a lack of food and a surfeit of exercise can do to the mind.
at May 30, 2007