The Beauty Of Money

I like money. I was reminded of this fact yesterday when my labyrinthine exercise in filing away the accumulated possessions of a lifetime reached the letter "M". And sure enough, there is a file marked "Money". Inside the file - amongst other things - was a 1919 20 Kronen Austrian banknote. As you can see from the illustration, it is truly a thing of beauty. 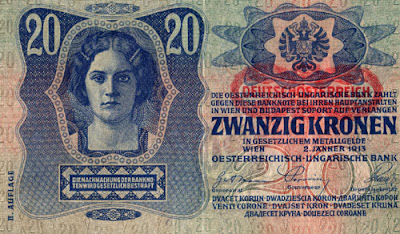 The keen-eyed amongst us will spot that the note is dated 2 Janner 1913. However, the even-keener-eyed will spot the red overprinting - if you can't make it out it is DEUTSCHOSTERREICH - which pinpoints the date of issue as that brief period after the collapse of the Austro-Hungarian Empire when the western bits of the Empire re-invented themselves as German Austria. Officially, German Austria existed for less than a year and the provisions of 1919 Treaty of Saint-Germain-en-Laye prohibited the use of the term and re-named the country Austria. Of course, that was not the end of the story ... but you didn't come here for a history lesson.

Whatever your opinions on German Austria may be, it cannot be denied that they could design a stunning banknote. I cannot imagine that, in years to come, people will have battered old cardboard files containing long out of date credit cards - kept for no other reasons than their aesthetic qualities. But, there again, one should never try and second-guess the potential eccentricity of true collectors. Think of my Uncle Frank and his bus tickets.