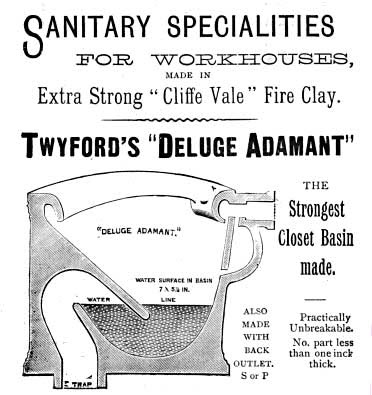 I remember, many years ago, there used to be a Public Toilet in Keighley. It was a grand Victorian affair close to one of the main road junctions in the town. No shrinking violet, it was built along the lines of a minor castle. When it came to advertising its purpose, there was no self-consciousness, no little pictograms of skirts or trousers, no polite little abbreviations. In ornate letters which must have been a yard high, it declared "WATER CLOSET". In case you missed this, above the two entrances were emblazoned "MEN'S WATER CLOSET" and "WOMEN'S WATER CLOSET". I always admired this approach: it said a lot about the town. Keighley was no "powder room" of a town and it was proud of the fact.

My thoughts returned to that august building in Keighley when, a week ago, my attention was drawn to a competition being run by Long Barn Books for "the best new Loo book". Several people have been kind enough to suggest that my writing reminds them of the strain of defecation and therefore I might be uniquely suited to have a go. The competition rules require you to avoid books about loos themselves, bottoms or any unsavoury subject and to steer away from established market leaders in the world of loo books.

After an initial think about the problem - whilst sat on the water closet one day - I came up with a shortlist of three ideas. I decided to try a sample section from each as a NFN posting and then let the great British public decide. Here then, is the shortlist :

1. 101 Ideas That Nearly Changed The World
A jolly romp through some of the madcap ideas which each had the capacity to change the world for better or worse but didn't do so because the ideas themselves were so intrinsically insane. See the example of the Saint-Simonite waistcoat posted last week. If this idea is the one which is submitted for the competition the challenge will be to work out the other 100!

2. A Cornucopia Of Meaningless Hobbies And Other Trivial Ways Of Passing The Time
Alan Burnett takes his analytical telescope to look at just a few of the extraordinary ways people spend their leisure hours. In addition to the Gordian world of the knot-head (see example from last week), he will venture into the murky realms of the lamp-post collector, the decorative soap maker, and the stick insect enthusiast (and many, many more). The problem with this idea is whether Alan Burnett would emerge sane from the other end of such an investigation.

3. The Meaning Of Life And Other Intractable Problems ... in Diagrams
Join us for a diagrammatic tour through religion, philosophy, science, politics, and soap operas. Can some of the most challenging questions that face mankind - what is the meaning of life, is global warming a real threat, was Tracey Barlow guilty of murder - be represented in diagrammatic form? The problem with this idea is that it is too much like hard work (the sample posted yesterday took days of effort) and the book - if it is small format as the publisher suggests - will have to be issued with a magnifying glass. Whilst there is no technical problem with such a solution (I recall once buying the Complete Oxford Dictionary reduced to just two volumes by means of micro-printing and it coming with its own magnifying glass) it might raise a few eyebrows if you were seen repeatedly entering the loo (sorry, water closet) with a magnifying glass.

Those then are the ideas. That is the shortlist. The idea has to be submitted to the publisher by the 14th June and therefore voting in this contest will close on the 31st May 2007. To vote, text, your choice (either IDEA, HOBBY, or CLOSET) to 07952 260402 (calls cost £2 plus standard network rates). You can also vote by leaving your choice as a comment on this posting.
at May 22, 2007