Take For Example My BVDs 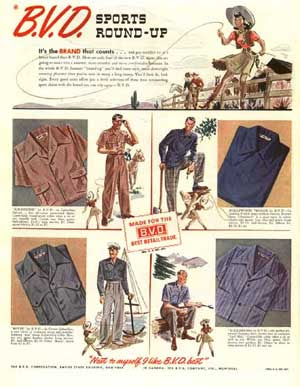 I normally get annoyed by those people who go on about computers and the Internet having spoiled the innocent pleasures of life. All "innocent pleasures" have been touched by technology at some stage : computers are merely the latest suspects in a long, and quite exalted list which includes television, radio, film, newspapers and if you go back far enough printed books. But everyone is entitled to a good grumble every now and then, so I have to say that it is such a shame that computers and the Internet have spoiled the age-old game of lyric-spotting.

Lyric-spotting is where you have what you interpret as the words of a particular song going around in your mind but you can't make sense of them because either you have mis-heard the lyrics or you have heard them correctly but still they don't make sense. The game is played over time - you listen to the song again and again until finally the words or the meaning fall into place. The problem is that the Internet - with its massive databases of song lyrics and its Wikieverybloodything - provides so many short cuts that the challenge evaporates before your eyes.

Therefore, when faced with a new lyric-spotting challenge - I try to avoid the Internet until every other avenue of guesswork and reasoning is used up. Take for example my BVDs. Stacey Kent includes a version of the song "Hard Hearted Hannah" on her latest CD (see my posting of a few weeks ago) and the song includes a line which sounds like :
"An evening spent with Hannah sittin' on your knees,
Is like drivin' through Alaska in your beevygees".
If you Google "beevygees" you get nothing which must be so rare these days as to be almost unique. It makes you want to change your name to Beevygees just to be different. It makes you want to invent a new biscuit just for the pleasure of naming it. "Have you tried one of these new beevygees, they're delicious"
Once I had started down the internet route to check out "beevygees", I couldn't resist checking to find out the true lyric which turns out to be :
"An evening spent with Hannah sittin' on your knees,
Is like drivin' through Alaska in your BVDs".
So go ahead and Google BVD and see what you get. Yes, that's right, what you get is Bovine Virus Diarrhoea which, you must admit, is not very pleasant and must be even worse if you are driving through Alaska soaked to the skin in it. My, that Hannah is a real turn-off.
Further research rescues you from this dreadful image. It turns out that BVD also stands for Bradley, Voorhees & Day, a firm of New York underwear manufacturers whose product was often called simply BVDs. Thus an evening snogging with Hannah is like driving through Alaska in your underpants. I'm glad we've cleared that up (thanks, I must say, to the Internet).
at September 24, 2007