Treat Yourself To A Cinnamon Pancake

I have been in love with Stacey Kent for years. The affair - which I must stress is entirely platonic and entirely one-way - started in 1998 when I suddenly got my hearing back after ten or so years of deafness. The first singer I seriously listened to was a young jazz singer who had just released her first CD to critical acclaim. It was Stacey Kent. In the years that followed my "hearing" went from strength to strength and so did her career : it was a kind of bond between us. I first saw her perform live at Wakefield Jazz Club and I was smitten. Some time after that she performed at our annual Marsden Jazz Festival. On the afternoon before she was due to go on stage I spent hours carefully adjusting the seats in the Mechanics Hall in the hope I might meet up with her. I did : and she was just as delightful, witty and intelligent as I had hoped she would be.
Stacey made her reputation out of her effortless interpretations of material from the so-called "Great American Songbook". She is the kind of singer who has a masterful way with a lyric : providing the kind of value-added that most singers can only dream about. The problem is : there is only a certain distance you can go with the Great American Songbook before you begin to cover material which is at best well-trodden and at worst hackneyed. The question many of Stacey's fans have been asking for the last year or two is "where does she go next?". Her signing for the legendary Blue Note label provided a perfect opportunity for a change in direction. But which direction? 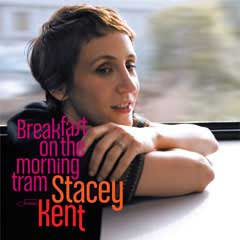 The answer is provided by her new CD which has just been released and which is called "Breakfast On The Morning Tram". The album title comes from one of the four tunes on the CD which has been specially written for her by Booker prize-winning author, Kazuo Ishiguro. Ishiguro's lyrics have been matched with tunes especially composed by Stacey's husband, the saxophonist Jim Tomlinson. The result of the collaboration - and the rest of the material on the album - is the perfect solution to the "where to go next" conundrum. It is different, it is fresh and it is stimulating. Stacey handles the somewhat challenging lyrics in a way few others could. She can manage to sing "Treat yourself to a cinnamon pancake, Pretty soon you'll forget your heartache" without it sounding contrived or over-clever. It might take a few hearings to appreciate the full joy of some of the material, but it is no effort - it's like finding level after level of first-rate material all in the same song.
Thanks to the wonders of digital technology you don't have to take my word for it. If you go to Stacey's website there are a couple of videos you can play in which she and Jim Tomlinson discuss the new album and sing extracts from it. Do yourself a favour and follow the link and treat yourself to a cinnamon pancake of a musical experience.
at September 10, 2007