The Day The Quack Doctor Came To Town

Today I decided to write a short book (what Sherlock Holmes would have referred to as a Monograph) about the history of the inns and taverns of Brighouse and district. As far as I know it has never been done and it certainly needs doing before the last local pubs vanish for ever. It is the kind of scheme even I should be capable of both initiating and bringing to fruition. All it needs is a little application, a fair bit of research and a measure of determination. So down I went to the local library to start the research. And that is where I met my Waterloo.

I was browsing through R Mitchell's 1953 book "Brighouse : Portrait of a Town" looking for references to the origin of various Brighouse pubs when I came across a table entitled "Trades and Occupations in 1822". This shows the various trades followed by the inhabitants of not only Brighouse, but the surrounding villages of Clifton, Lightcliffe, Hipperholme, Rastrick and Southowram. 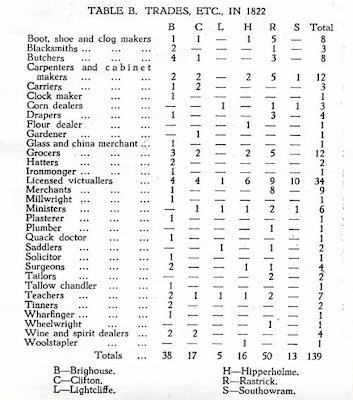 Now the thing I should have been noting was the comparatively small number of licensed victuallers in Brighouse (4) compared to some of the surrounding villages such as Rastrick (9) and Southowram (10). What I should have been asking myself were the two central questions : which were the four pubs of Brighouse in 1822, and why were there so few in what was the central town of the district? But all I could do was ask myself the question "what on earth is a Quack Doctor"? When I got home, instead of writing up my notes on some of the pubs I researched I went in search of a history of quackery on the web. I always thought of it as a term of abuse for a fraudster without medical qualifications, but here it seems to be used in a less prejudicial sense. I still haven't found a satisfactory explanation for the term being used in an official listing of trades, but I will continue to search until I find an answer or ....

Or, if I am honest, until I find another fascinating but unrelated question to ask myself. Then I will forget the Brighouse Quack and go chasing after some other mirage. Which is why I never managed to write the "Lives Of The Great Brewers" or any of the other wonderful books I have dreamt up. And it is why, most likely, the history of the great inns and taverns of Brighouse and District will forever go unrecorded.
at March 31, 2008