A Confluence Of The Independent Labour Party 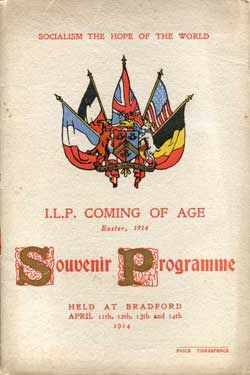 It all started on Sunday when we called in on our old friends Kathy and Arthur and they gave me a photograph (which features me, amongst others, holding a framed portrait of Kier Hardie) taken some 35 years ago at an Independent Labour Party (ILP) gathering at Clarion House in Nelson. The photograph is reproduced on my Daily Photo Blog.
And then, a couple of days later and quite independently, I was sorting through some old papers and I came across a collection of three documents which date back to the 1914 Conference of the ILP which was held in Bradford. The three documents are illustrated here and they are a wonderful Souvenir Programme, a quite beautiful silk badge or bookmark, and a delegate's credential in the name of Mr J. S Middleton. For a moment I wondered how I had acquired these three quite rare artifacts, but the name of the delegate provided the necessary clue. 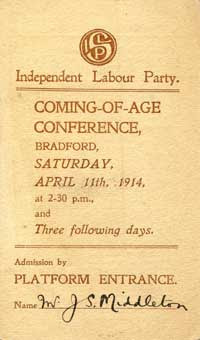 J. S ("Jim") Middleton (1878-1962) was the assistant to James Ramsey MacDonald, the first General Secretary of the British Labour Party. At the time the ILP was still an integral part of the Labour Party and therefore he would have been at the 1914 ILP Conference which was that organisation's "Coming of Age" Conference. Jim later went on to become General Secretary of the Labour Party, a position he held until the end of World War II.
I never met Jim - who had died before I got involved in politics - but in the 1970s I did know his widow, Lucy Middleton. Lucy herself had a long and outstanding career in the labour movement, serving as a MP in the 1945 Labour Government and later becoming the first Chair of "War on Want". I knew Lucy well and she encouraged me in my own involvement in the Labour Party. We shared a love of Labour History and it was her who gave me the three documents reproduced here.
The ILP cropped up a third time this week when I was reading Andrew Marr's "A History of Modern Britain". In the first chapter he discusses that tremendously influential 1945 Labour Government and looks at the background of several of its leaders such as the Prime Minister, Clement Atlee. Atlee was also active in the ILP having joined in 1908 and in 1913 he became a Lecturer at the London School of Economics. But, as yet, I have not been able to discover whether he was at the 1914 Bradford Conference, but no doubt someone will write in and tell me. If he was it would make the confluence almost perfect.
at July 03, 2008