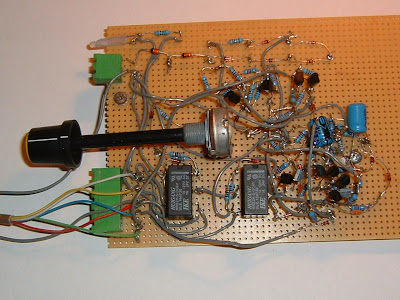 JGC said I should photograph this for posterity. So here you are.

You might well ask what it is. Well, a few days ago JGC and I had a lovely day out on our converted (to diesel-electric drive) narrowboat... except for the horrid moment mid-trip the generator didn't speed up after starting like it should. Horrid moment because if it really wouldn't we'd have to turn for home or run out of electricity... not to worry, after a few hairy moments I thought how to make it speed up electro-manually.... BUT... my old VCS had clearly gone AWOL...

VCS being the name for the box of electronics automatically controls the generator speed to normally recharge as fast as possible but with a limit so as not to ruin the batteries... and some other useful effects.

Anyway, time to make a new VCS, hopefully better/more useful than the last (let alone actually working)... and here's a picture of my electronic works, just successfully completed and tested today. Since all this ends up in a shiny metal box hiding what's in this picture it doesn't matter what the bits look like so long as it works... that's my attitude, anyway, as you can see.

This all goes in a shiny metal box except where the green blobs have connectors clip in rather than the test wires you can see going off to the left. The volume control knob (visible mid-left) sticks out the top, as does the white thing top left which flashs red or green (or doesn't) to show what's happening.

JGC was right, I had to photograph this for posterity... nobody'll ever see it again soon. Not even me, I hope.