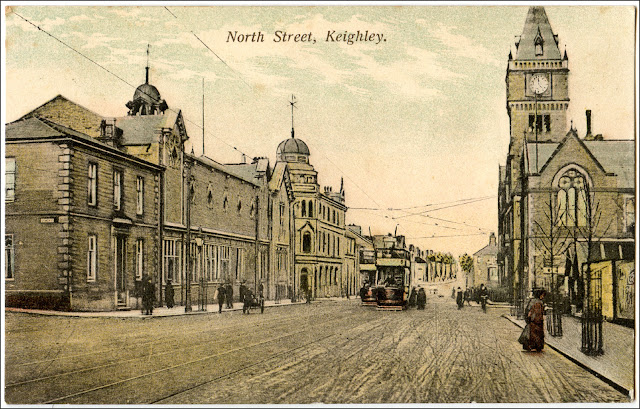 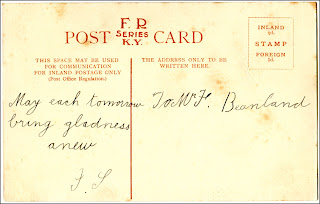 There is nothing new about social networking, nothing modern about text messages, nothing fresh about e-mails. This early twenty-first century craze for short and rapid communications between a widespread group of friends was almost perfectly mirrored by the great postcard craze of the early twentieth century. This postcard comes from the collection put together by my mothers' Uncle Fowler (whose name was always pronounced "Uncle Fooler" within the family) and shows North Street in his home town of Keighley in West Yorkshire.

One is perhaps tempted to wonder how far - in the words of the philosopher Marshall McLuhan - "the medium is the message". Was it perhaps the postcards, or the text messages, or the e-mail, that told us more about the people that sent them, than the content of the message itself. Was Edwardian England a pasteboard society compared to the electronic village we now live in? Let us take, for example, that message : "May each tomorrow bring gladness anew" : is that the stuff of a society which was still coated in Victorian sentimentality? Could you imagine such a message as a Facebook status update today? What responses would it bring? In the interests of philosophical speculation. I have just made it my Facebook status. I will let you know about any responses I get. But one thing is for sure - nobody will cut it out, paste it in an album and then circulate it to the world in 100 years time. 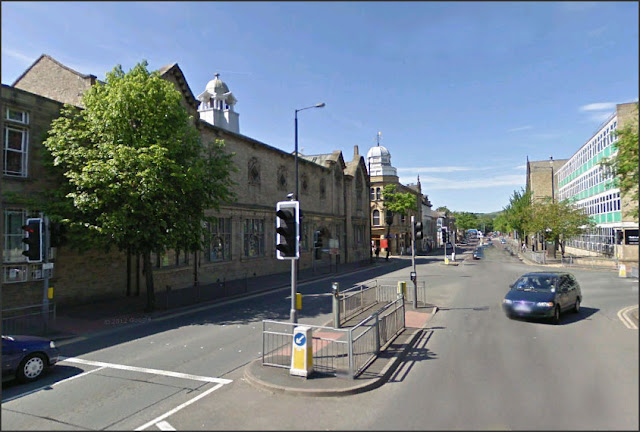 For those of an inquiring mind, the two buildings on the left of the street still remain : one is still the library, the other is now a Wetherspoon's bar. The fine building on the right of the original postcard picture is the old Mechanics Institute, and as you can see from the recent photograph, it is long gone. Each tomorrow may not bring gladness anew, but it often brings buildings anew.
at May 07, 2012