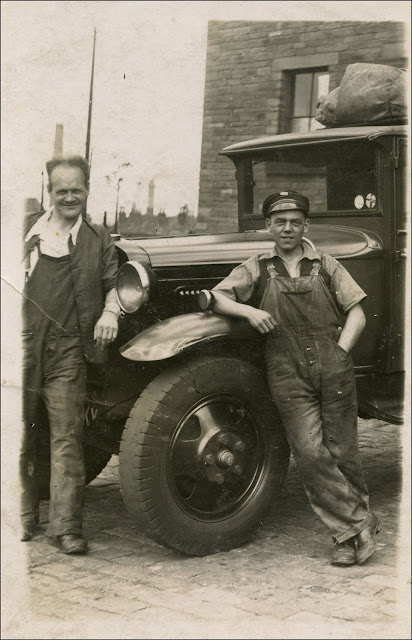 Our Sepia Saturday prompt this week shows an advertisement for Oshkosh Overalls and Workshirts, "the big overall for all big jobs". My initial reaction to the prompt was that I had several photographs of all manner of relatives in overalls - I come from a long line of mechanics and machine men: oil and engine grease lubricate my very genetic code. Perhaps it would have been better for me if I had come from a long line of archivists, at least that would have meant that my family photographs would have been catalogued and I would have been able to find the photographs I was looking for. The only "overall photograph" I could put my hands on - without too much hard work - was this one which shows my Uncle John (left) with a fine looking wagon from the 1920s or 1930s. I suspect that I might have used this image on my Blog before but all my efforts to track down a new "old" photograph were to no avail.


In many ways it should have been a photograph of my father, because I always associate overalls with him. Even after he retired he would often go off to his shed or garage, put an old pair of overalls on and start sorting through his collection of screws, or bolts or gears or whatever. There is something almost timeless and constant in this vision of my father in overalls, it is part of the background to my life, like Yorkshire, boiled sweets and fish and chips. But as I searched through a distant shoebox looking for a picture of my dad in his overalls I came across this letter. 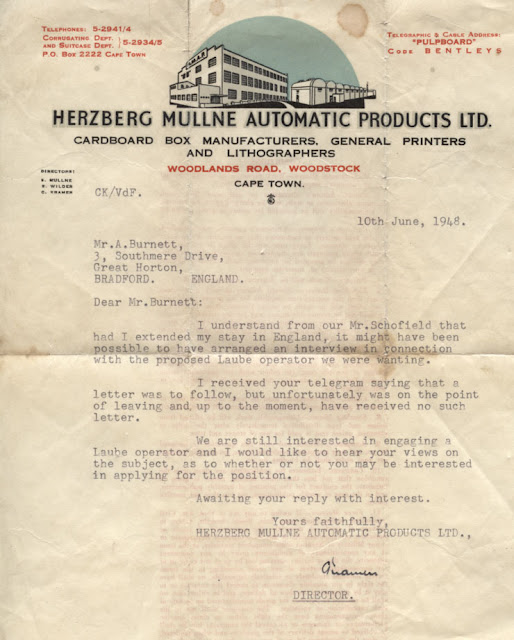 As you can see it is a letter from a firm of printers in South Africa trying to find out if my father was still interested in applying for a position with them. There is talk of a telegram from my father and a letter to follow. The letter fills in some of the gaps in the story I vaguely remember being told about. The story of a job being offered in South Africa, my parents on the verge of emigration and then backing out at the last minute. Sat here 64 years later I wonder what caused them to send the telegram, back down from the job, and remain in West Yorkshire. And then I notice the date of the letter which was sent just seven days before I was born. What might have been, what might have been.