It's Not Over Until The Fattish Lady Signs Her Autograph 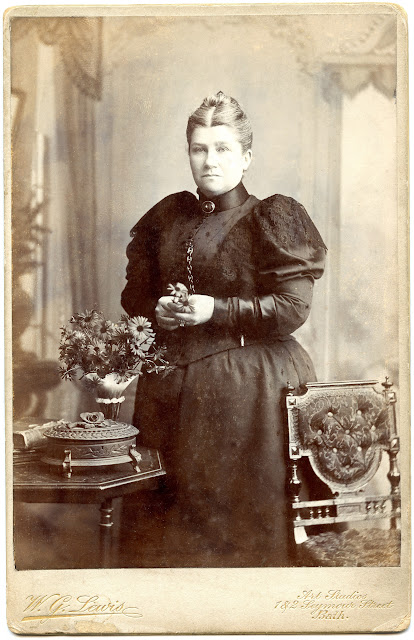 I'm fat - I won't deny it. I'm not particularly proud of it, but I acknowledge that if you were describing my physical appearance to a third party who hadn't met me, the term "fat" might be a useful addition to your descriptive vocabulary. If push came to shove, I suspect I would prefer the term "fattish" as that conveys a spectrum upon which I stand (or more likely, upon which I sit and eat a bag of crisps), but if you were to fall back on fat, I confess I would be bang to rights.

All this means that I think I am well within my rights to describe the lady who is the subject of this Victorian Cabinet Card as being fat. I could be wrong - it's been known - and it may be that the Victorian dress she is wearing might cover - in yards and yards of black crepe and countless undergarments of unimaginable description - a figure that is as skinny as a lettuce leaf between two slices of rye bread. Let us just agree that she is towards the fattish end of the spectrum. 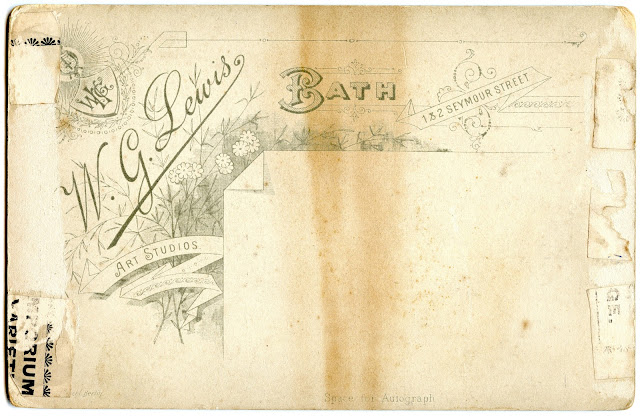 The photograph is the work of the Victorian photographer, Walter George Lewis. Lewis had his studio at 1 and 2 Seymour Street in the ancient city of Bath and seems to have been active in the profession from the early days of the studio photography boom in the late 1860s through until the first decade of the twentieth century. It would appear that he made a good living as a photographer; by the time of the 1911 census he was retired and living in Norfolk Crescent - one of the most desirable Georgian crescents in the city. It is unclear as to where his skills as a "photographic artist" came from; his father was charmingly listed as being a "turn cock to Bath Water Works" in the 1851 census.

At first I was a little intrigued by the unusual reverse of the Cabinet Card with what appears to be a folded piece of paper covering most of the traditional arts and crafts design that photographic studios at this time were so fond of. Once scanned and enlarged, however, I noticed the explanation - "space for Autograph" which is a lovely touch. Sadly the fattish lady didn't add her autograph, and so we are left not knowing who she was and whether, like me, she had a voracious appetite for potato crisps.
at March 20, 2017