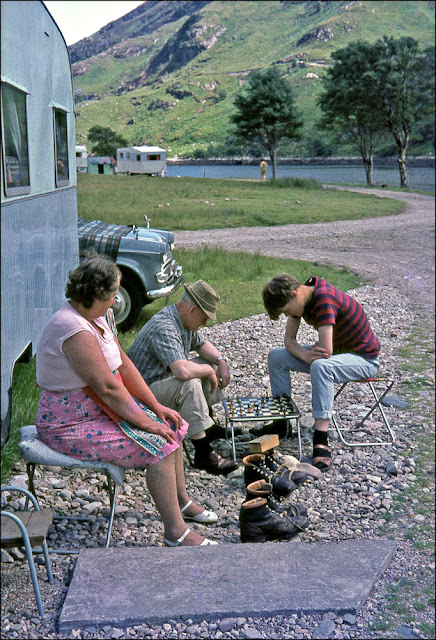 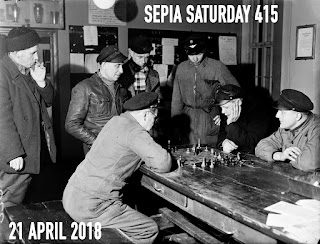 Our Sepia Saturday theme image this week shows two railway workers in Finland playing chess during a break from work. That stance of studied concentration is matched perfectly by my picture which features a chess game between my father and myself. The photograph must have been taken by my brother, Roger, and it dates from around 1965 when we were on a family holiday in Scotland.

The image - which is a scan of an old 35mm colour slide - is a perfect example of how old photographs can let loose a flight of memories. That red striped Dennis-the-Menace shirt, I can remember with such clarity I am almost tempted to check to see if it is still in my wardrobe. Those boots which have been set out to dry in the sun, just before (or possibly just after) they were cleaned and "dubbined" to waterproof the leather. They were used to climb the mountains that can be seen in the background which, I believe, were on the banks of Kinlochleven in Scotland. The car and the tartan travel blanket open up another box full of memories: that shade of pale blue, the shine of the chrome bumpers, the wing mirrors sticking out like antlers. My mother, Gladys, pinny-wrapped, watching with a degree of proprietorial interest.

I dare say that I can enlarge the image and review the state of the game and decide whether or not I was in a winning position. That, however, would take my attention away from the image itself: a random image, but one dripping with memories.

More memories are on offer by going to the Sepia Saturday Blog and following the links.
at April 21, 2018