The King, The Prince And The Prestwich Photographer 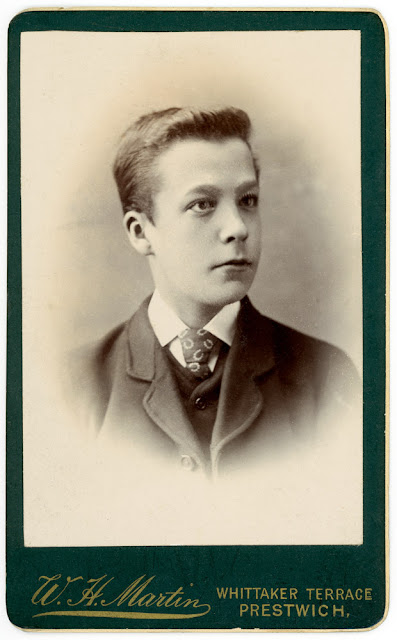 I would guess that this little Carte de Visite from the studio of W H Martin of Prestwich, Lancashire is Edwardian rather than Victorian. I know nothing about the subject of the photograph other than he seems a bright young fellow with a rather distinctive horseshoe pattern necktie. I don't know much more about W H Martin, other than I suspect it was William H Martin who was born in Prestwich in 1878. In a description of nineteenth and twentieth century Prestwich published by Bury Metropolitan Council, Martin's photographic studios are described as follows:
"The studio on the corner of Hacking Street and advertised as "Artist and Military Photographer ... under the distinguished Royal Patronage of His Majesty the King and His Royal Highness the Prince of Wales"
The part about royal patronage sounds very grand, but every small town photographer in the land was claiming similar associations around the turn of the century. With the best will in the world, I cannot see the King and the Prince of Wales getting a tram up to Prestwich in order to have their likeness captured by Willie Martin.