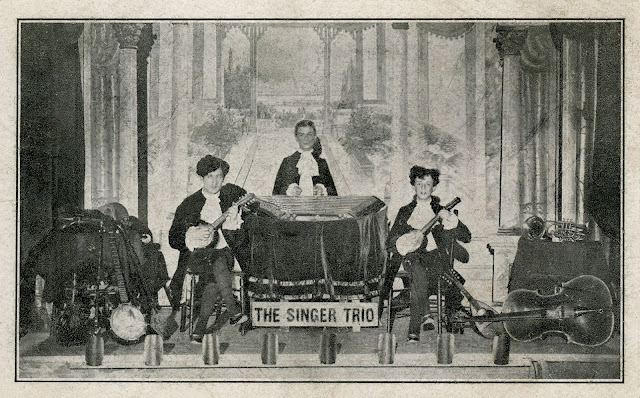 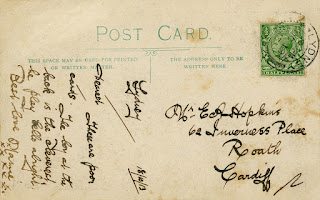 This trio of musicians appears on the front of a vintage post card which was sent to a Mr E A Hopkins in Cardiff in October 1913. The message on the reverse is as follows:-
Lydney, 18/10/13
Dearest,  These are poor cards. The boy at the back is the cleverest, he plays cello alright. Best love, Mame xxxxxx
Lydney is a small town in Gloucestershire near the Forest of Dean, and Mame's "dearest" lived some 50 miles away in Cardiff.


The Singer Trio - who were also known as "The Musical Boy Scouts" - toured the variety halls and music halls of Britain in the early part of the twentieth century. In an advert in the variety newspaper "The Era" in November 1913, they described themselves as follows in an advert for tour dates:

The following year brought the outbreak of the First World War, but the Singer Trio were still touring the theatres, although now they were having to share the billing with moving picture shows about the horrors of war - "a beautifully coloured production"!


There are frequent mentions of the Trio in the stage and variety press until September 1915, after which all mention of them ceases. One can only assume that the "musical boy scouts" were eventually drawn into that most tragic of twentieth century performances - the Great War.