Postcards From Home : Across North Bridge 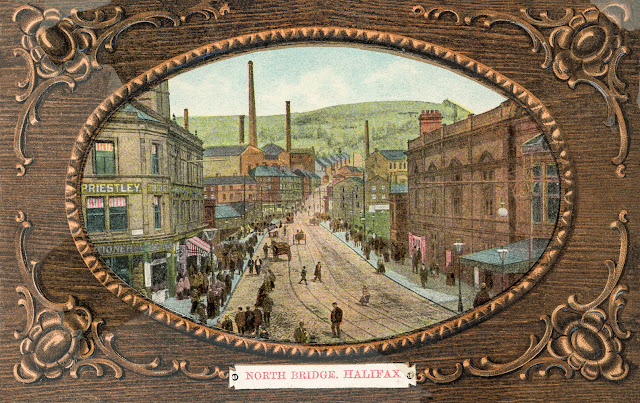 A vintage postcard of North Bridge, in Halifax, back in the days when it was the main route out of town to the north. Back then, the buildings hugged the side of the road at both ends of the bridge, and it did not have to live under the concrete shadow of the Burdock Way overpass. People streamed over the bridge, as did trams and horses and carts, on their way to Boothtown, Northowram, Southowram and beyond. The building on the right of the picture is the old Grand Theatre, now sadly gone, but when I started crossing the bridge on a daily basis in the late 1950s, it was still just about there. The buildings on the left still survive, but look lost and a little lonely these days. Practically all of what you can see on the far side of the bridge, was swept away in the construction of Burdock Way and its associated roads and roundabout some fifty years ago. I can just about remember the area as a patchwork of shops, mills, pubs and streets of terraced houses. 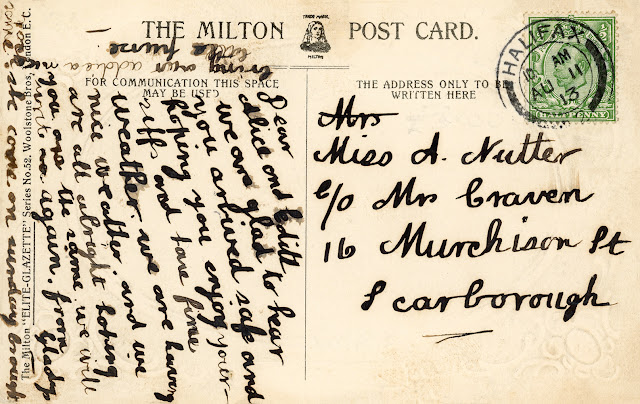 This particular postcard was posted in 1913, although the photograph probably dates from ten years earlier. The card was sent to Alice and Edith Nutter from their friend Gladys, and is full for the inconsequential chatter that is now the stuff of text messages. Undoubtedly, text messages are cheaper and quicker to reach their destination. But who will look at a text message in one hundred years time and see a picture of Halifax that no longer exists? 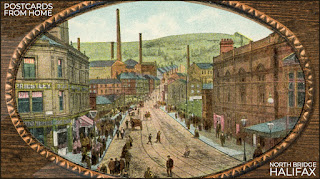