A Bath, Some Militia, And An Ode To Japan Blacking

As we enter the year 2020, everything in the news is far too depressing to dwell upon. I am therefore taking refuge in the news of the past - if for no other reason, than to confirm that things were just as depressing in the past.

Today I am returning 200 years to the 3 January 1820, and my newspaper of choice is the splendidly named Leeds Intelligencer And Yorkshire General Advertiser. 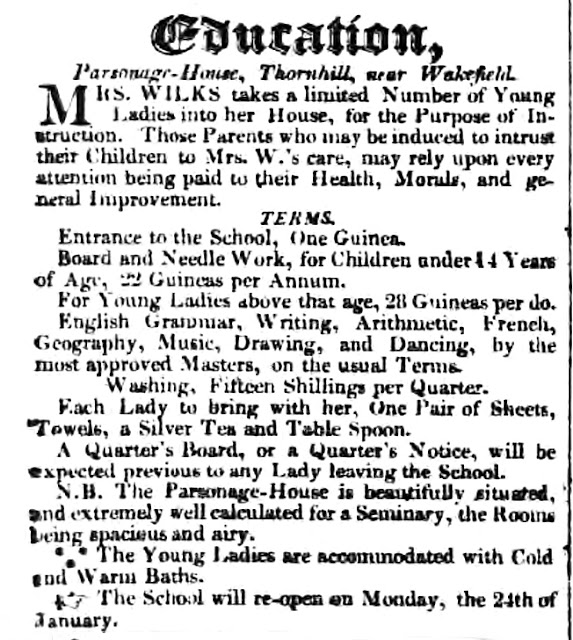 Let us start with a look at education (for the privileged classes) two hundred years ago; and an announcement from Mrs Wilks of Parsonage House, Thornhill, near Wakefield. Mrs Wilks "takes a limited number of young ladies into her house for the purpose of instruction". Yorkshire parents will have been pleased to learn that they "may rely on every attention being paid to (their daughters) health, morals and general improvement". The pricing structure looks a little complicated - there appears to be a flat rate for accommodation, extra for tuition, not to mention an additional fifteen shillings a quarter for washing (although whether that is for the child or their clothes isn't stated). The most delightful sentence in the entire announcement is undoubtedly the penultimate one: - "The Young Ladies are accommodated with Cold and Warm Baths"! 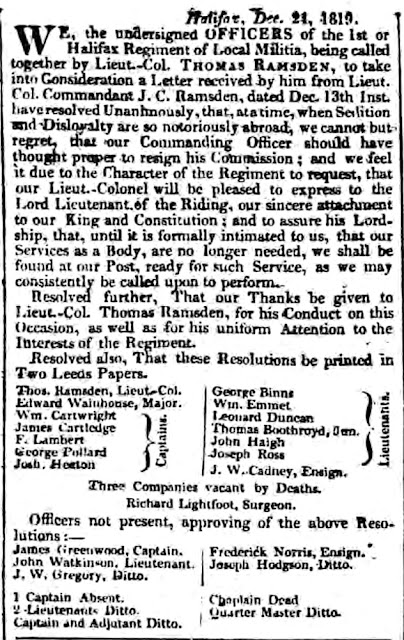 Page two contains a piece that possibly deserves a three-year PhD thesis. It is a public announcement from the officers of the Halifax Regiment of the Local Militia which regrets that the Commanding Officer of Regiment has resigned his commission at a time when "sedition and disloyalty are so notoriously abroad". Context is everything in understanding this somewhat strange announcement by the Halifax militia officers: the battle of Waterloo was less than five years in the past, and the massacre at Peterloo took place only the previous August. The officers proclaim in their statement that "until it is formally intimated to us, that our services, as a body, are no longer needed, we shall be found at our post, ready for such service, as we may consistently be called upon to perform". Before we all give the Halifax officers a resounding cheer, it must be remembered that the perceived enemy at the gates was not a foreign army, but the impoverished and disenfranchised English working man and woman.

Let us finish on a more light-hearted note, with an advertisement from Richard Turner, the manufacturer of "Real Japan Blacking". Japan blacking was a varnish used to coat iron and steel and was very popular in the early nineteenth century. At a time of the year when we have all had a surfeit of mindless television commercial jingles, it is worth remember that the genre is not all that new. All together now ....

"Turner, it is to thee we owe
This all resplendent beauteous glow"