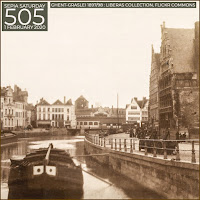 Our Sepia Saturday theme image this week could be made to measure for the two photos I am going to share. Although I chose the theme image, its connection to two old photographs I took some 52 years ago didn't occur to me until the other day when I was trawling through my collection of old colour slides looking for an image to post. The theme image comes from the Flickr Commons collection of the Belgian organisation Liberas, which is devoted to preserving and managing the heritage of liberal organisations in that country. The actual image features a canal barge in the Belgian town of Ghent in 1897. 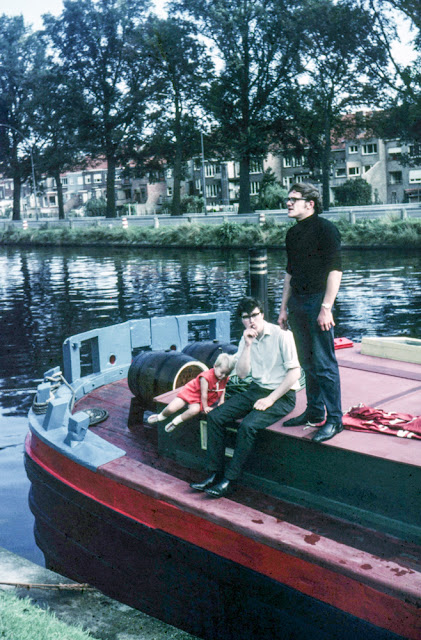 Jump forward 71 years and move north-east by fifty kilometres and you will get to Bruges in the summer of 1968. My photograph features my niece, Diana, two of my friends, Dave Hebblethwaite and Darrel Oldfield, on my brothers barge, Brookfoot, which was moored on a canal in the beautiful city of Bruges. If 1967 was the Summer of Love, then 1968 was the famous Summer of Discontent, People throughout Europe were protesting on the streets and calling for a new solidarity between workers and students, friendship between all European people, and the creation of a new society. Darrel, Dave and myself had left our native West Yorkshire, and, carrying a banner proclaiming that "Workers Unity Wins", we had started hitchhiking around Europe, seeing the sites, meeting up with other groups of students, and luxuriating in our youthful freedom. 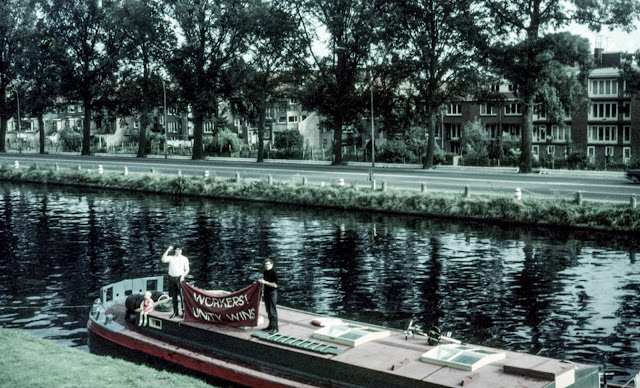 My brother, his wife and daughter, were on a different European mission. They had recently sailed their flat-bottomed Yorkshire barge across the English Channel, and had embarked on a tour of the canal system of Northern Europe. Our paths crossed in Bruges, and we stayed on the barge for a couple of nights. Following the meeting which is preserved in these two old photographs, Darrel, Dave and myself continued our journey around Belgium and Holland and then returned home to go our separate ways to University, and to whatever life had in store for us. My brother and his family continued sailing through the canals of Europe and then swapped canal boats for sailing boats and headed for the Caribbean. We are all still waiting a new society, and - on this day when the UK officially leaves the European Union - I fear that it might be further away than ever. 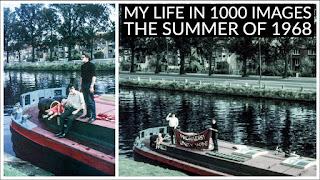