In Defence Of Josh Matthewson 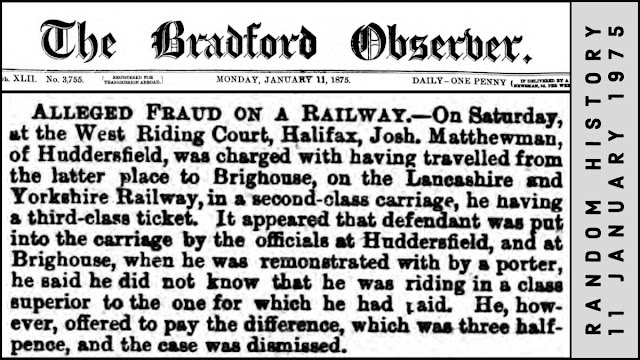 ALLEGED FRAUD ON A RAILWAY - On Saturday, at the West Riding Court, Halifax, Josh Matthewman, of Huddersfield, was charged with having travelled from the latter place to Brighouse, on the Lancashire and Yorkshire Railway, in a second-class carriage, he having a third-class ticket. It appeared that defendant was put into the carriage by the officials at Huddersfield, and at Brighouse, when he was remonstrated with by a porter, he said he did not know that he was riding in a class superior to the one for which he had paid. He, however, offered to pay the difference, which was three half-pence, and the case was dismissed.


It is never too late to correct a miscarriage of justice. 145 years after this report appeared in the Bradford Observer, I would like to protest on behalf of Josh Matthewson for the way in which he was dragged in front of the courts, like a common criminal, for "riding in a class superior to the one for which he had paid". He was put in the wrong carriage when he boarded the train in Huddersfield, he explained his innocence when he was remonstrated with by a porter in Brighouse: and yet is name is paraded across the pages of the popular press and left on public view for almost a century and a half. During his life, Mr Matthewman may have rescued stray puppy dogs, raised children who changed the world, endowed homes for the poor and downtrodden: but all he is remembered for is his missing three half-pence ticket. What a perfect example of what was petty about the petty session courts.
at January 11, 2020