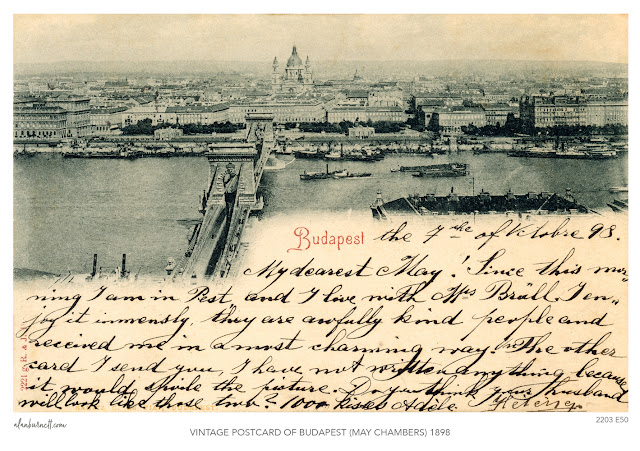 I have been collecting old picture postcards for the best part of forty years. What attracts me to them is that they represent little nuggets of history, brought to life through, not only the picture, but also the brief message that they contain.. This postcard of the River Danube in Budapest is one of the earliest in my collection, having been posted in October 1898, five or six years before the postcard collecting craze really took off in Britain. These early postcards had undivided backs, which could only be used for the address of the recipient. The message had to somehow be compressed into any available space there might be on the front of the card, and early postcard printers would limit the size of images in order to allow a few sentences to be added by the sender.

The card was addressed - in the most elegant copper-plate handwriting - to Miss May Chambers of Burngreave Road in Sheffield, and, as far as I can make out, the message is as follows:-

My dearest May, Since this morning I am in Pest, and I live with Mrs Brall. I enjoy it immensely, they are awfully kind people and received me in a most charming way. The other card I send you, I have not written anything because it would spoil the picture. Do you think your husband will look like these two? 1000 kisses, Adele Fleming. 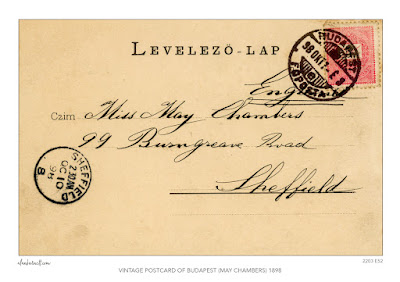 Who were May and her friend Adele? What was Adele doing in Budapest, staying with Mrs Brall? And what of the other card which is mentioned, but sadly, is not in my collection? "Do you think your husband will look like these two!" Is May to marry a Hungarian Count? Has Adele gone on a tour of Europe to find a possible husband for her friend? It is all so intriguing. I do have a few other cards sent to May Chambers in my collection, so it is perhaps time to get them out and try to build a picture of her life. 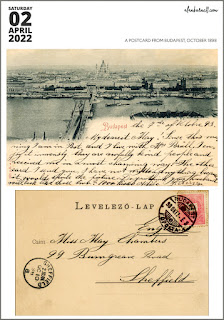