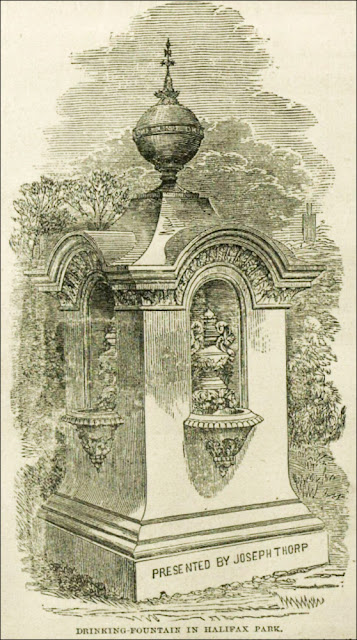 An article in the Illustrated London News of the 13th August 1859 reminds us of the gift of a water fountain to the people of Halifax by Joseph Thorpe. The fountain was erected in People's Park, where it stands to this day. Whilst such a gift, two or three centuries earlier, might have been mainly about providing a safe source of drinking water for a thirsty population, Thorp's Fountain in People's Park - and a similar one located at the bottom of the Moor opposite St Jude's Church - was as much about his support for the temperance movement as it was about quenching the thirst of the hard working population of the town. 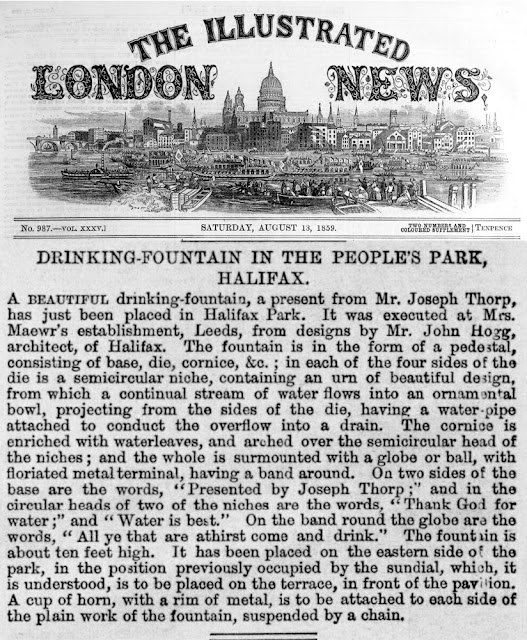 The fountain was decorated with the maxims :Thank God For Water" and "Water Is Best", along with an acknowledgement of the benefactor himself. Thorp was a prominent local quaker, wool merchant, Justice of the Peace, and leader of the temperance movement (between 1864 and 1866 he was the President of the British Temperance Movement).

Whether water is, in fact, best, is a potential subject for debate (preferably over a pint in a local pub), but it is sadly true that the fountain has long been disconnected from a water supply, and therefore all those that are athirst these days, will need to bring their own bottled water!