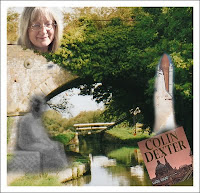 You will no doubt recall my weekend challenge which was to somehow de-construct this picture and work out what I was doing over the weekend. Whilst many people got individual elements of the answer, nobody was able to put them together to tell the full story. So here it is. Let's start with the picture. The background image is of a bridge over a canal (the more observant of you will have spotted it was a canal by the presence of lock gates). The location of the canal can be deduced by the book cover at the bottom right of the picture which is from a collection of Morse stories by Colin Dexter - such stories are famously set in Oxford. Staying with that book image (it is a triple clue and we will return to it later), just above we can see an image of the launch of the space shuttle. The important word here is "launch" and if you add this to "book" then you will know what type of event I was attending. Move your eyes to the "beautiful woman" (the quote was from AngelMay in her comments on the post, but I have to agree) at the top left who most of you will now recognise as my good friend and occasional News From Nowhere contributor, Jane Gordon-Cumming. If you read the blog description you will know that Jane lives in Oxford and is a writer. So far, so good. The rather ghostly figure at the bottom left of the picture should give you the title of her new book of short stories which is "The Haunted Bridge and Other Strange Tales Of The Oxford Canal". The launch of this collection took place, appropriately enough, on Halloween Night, and the two guests of honour at the launch party were Jane's sister, the novelist Katie Fforde, and - going back to that book for the third time - the creator of Inspector Morse, the famous crime novelist Colin Dexter. There, easy wasn't it? 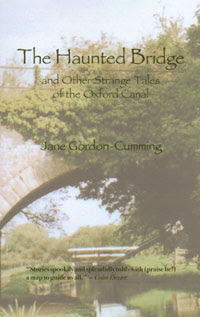 The party was great fun, even more so because it took place in a pub (my beer-loving friends might like to note that several Wadworth real ales were available). Colin gave a splendid speech and - quite rightly - praised Jane's writing skills, and there were loads of friends, old and new, in attendance. The book will eventually be available via Amazon but, as yet, it has not been added to the site. I will provide a link to the Amazon page when it is available but, in the meantime, if people would like to order copies they can always contact Jane direct and order a copy. Details of the book will also soon be available on her website.

Another book which was available at the launch was a new collection of sea stories edited by Jane's brother-in-law, Desmond Fforde. "A Seaman's Book Of Sea Stories" contains stories that range from the Napoleonic wars, via ships that traded under sail round Cape Horn, to what it was like to take charge of a ship in convoy, serve in the fore-ends of a submarine or fly a Corsair against the Japanese. I have already bought a copy and started reading what is a wonderful collection of tales. The book is available from Amazon and all profits benefit the Prostate Cancer Charity. You can order a copy from Amazon at the following Link.
So a most enjoyable weekend, meeting up with old friends, drinking good beer, and reading good books. I leave you with a picture I took at the launch party which shows (from left to right), Katie Fforde, Colin Dexter, and, of course, Jane Gordon-Cumming. 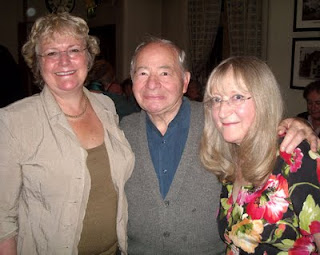