A few months ago I added "Link Within" to my blog. It was a nice idea : it would search through my blog back catalogue and pull up three related posts which it would spotlight at the end of the current post under the heading "You Might Also Like". I assume it chooses the related posts by searching for key words in the titles or the labels. However it did it, it seemed to work quite well .... for a time. Then for some reason it became fixated on one particular post and added it to the "You Might Also Like" at the end of every post. What is worse, the post in question was one titled "So Boring"! After a week or two of my readers being asked whether they might also be interested in "So Boring", I began to get a bit of a complex and decided that I was being unfairly targeted by a Google gadget which was far too perceptive for its own good. Deciding to fight back, I deleted the original "So Boring" post in the hope that if the post didn't exist, the gadget would no longer direct readers to it. Did it work? Did it heck. It continued to offer a link to "So Boring" and, when you clicked on it, it suggested that it could no longer locate the particular post in question (hinting, I suspect, that there were too many that fitted the description to choose from). My only recourse was radical surgery and therefore I removed the "Link Within" gadget altogether.
Which was a pity as the ability to point readers in the direction of older posts was quite useful. And it would also be useful to point readers in the direction of some of the posts on my other blogs, or some of the posts of my blogging friends. The only solution was to manually add a Link feature at the end of posts and this I have been experimenting with for the last few days. So, from now onwards, at the end of each post, you will find a ""You Might Also Like...." link list. At some time or another I will try to include links to all the other blogs I follow, but the order will be totally random so if your blog doesn't appear in the near future, just be patient.
As we seem to have got on to the "boring" theme I thought I would share with you another postcard from my collection. I remember buying this postcard forty or so years ago. I was attracted to it at the time because I thought it was probably the most boring picture postcard I had ever seen. It features three buildings in Hipperholme - a village about six miles from where I live - and shows the church, the pub and the newsagents shop. Whilst such a triptych would normally have the power to be visually attractive, poor Hipperholme seems to be devoid of beauty in each case. 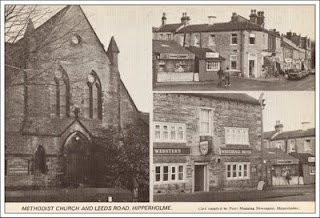 YOU MIGHT ALSO LIKE ........
A CANADIAN FAMILY : A blog all about postcards that is never boring is the one published by Canadian blogger Evelyn Yvonne Theriault. Whether your interest lie in postcards or genealogy it is always well worth a visit.
POSTCARDS FROM AMY : Talking of postcards, you can catch up on the latest postcard from my and my dog Amy describing our coast-to-coast walk across America.
at November 20, 2009