Theme Thursday : When Is A Castle Not A Castle? 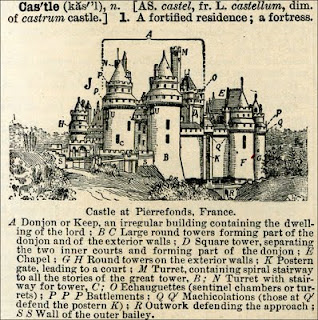 When is a castle not a castle? I know it sounds like a daft question, but I happen to be rather fond of daft questions (I am a great believer in the adage "never ask a sensible question when a daft question will do"). Now according to Webster's Dictionary (which, I seem to recall, like Bob Hope and Bing Crosby is Morocco bound) a castle is "a fortified residence" and the editors even included a diagram to show the kind of things any self-respecting castle should have: things like turrets and battlements, keeps and dungeons.

The question was prompted by my desire to include a local castle in my post for this week's Theme Thursday.  But there are not many castles around here. There is a Castle Hill a few miles away in Huddersfield, but the castle in question was demolished about 700 years ago. There is a castle in Pontefract, but there isn't much left of it and, anyway, I always come out in a rash whenever I go near Pontefract. And then there is Cliffe Castle in Keighley. That would do. Surely. 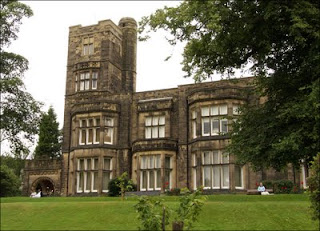 Cliffe Castle started life as Cliffe Hall in the 1820s but in 1848 it was bought by a local mill owner Henry Butterfield. The Butterfield family were local weavers made good and Henry had pretensions of greatness and therefore set about constructing himself a genealogy. He added a few turrets and a battlement or two to Cliffe Hall and renamed it Cliffe Castle. And old Henry Butterfield became part of the landed gentry. So it would seem that a Hall becomes a Castle when you add a few important bits to it. But my problem in including Cliffe Castle in this Theme Thursday post on castles is that those bits have dropped off again. It may be that Henry cut a few corners and - in the best traditions of my native County - decided to "save a bob or two" : but his building work wasn't all that successful and most of his turrets, towers and battlements fell down in the next eighty or so years. So what is left now is the original Hall with a bit stuck on the top. And that takes me back to my original question "when is a castle not a castle"?

When I got fed up of trying to find an answer I transferred my attention to Skipton, a few miles further up the road. Skipton has a castle. A real castle with big gates and wonderfully solid walls. Like any half decent castle it is nearly a thousand years old and it has experienced at least one bloody three-year siege. And I happen to have a postcard with a picture of the main gateway to the castle. 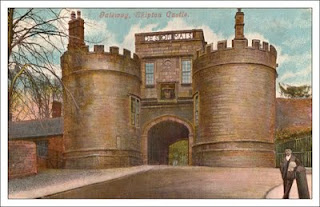 The motto on top of the gateway is DES OR MAIS which, I am reliably informed is Medieval French for "Henceforth". One has to admire self-belief of the real aristocracy : as far as they were concerned they had the right to lord it over everyone else not just for the moment but henceforth. But at least they built their castles with better materials than old Henry Butterfield and they are still standing. Their castles are, without a doubt, still castles.

You can read the other Theme Thursday posts by following this LINK.