At the very start of my fourth year of blogging I thought it would be useful to reiterate the basic principles of my blogs. My Mission Statement, my Guiding Philosophy, my House Style. It is this : never say in a sentence what can be said in a paragraph. Never be concise when you can be loquacious. Never go in a straight line when a circuitous route is available. To illustrate the point let me explain that when I started putting this post together ten minutes ago I had two important pieces of information to convey. The first is that I can announce that I have achieved my two stone weight loss target a good few weeks in advance of our January holiday. The second is that I am once again launching the "Holiday Book Bag Awards" (sponsored by the Peninsular and Oriental Steam Navigation Company) which will help to choose the six books I take with me on holiday in January. So, those are the two vital bits of information. If you are particularly busy at the moment or if you have trees to prune, you can go away now. All the rest of this post is gild paint applied to a lonely lilly. All the rest is just fluff.
So how should I illustrate this little post? I turned to my collection of modern postcards and found a suitable illustration which is, in fact, a reproduction of a Pacific Line poster advertising an "ideal sunshine tour round South America, Robinson Crusoe's Island and the West Indies". The ship you can see in the distance is the RMMV Reina Del Pacifico which had a gross registered tonnage of 17,702 tons. So I thought I could make some suitable little joke about it being a couple of tons lighter by the time that our little company of six embark on its modern cousin in nine weeks time. But first I needed to know a bit about the Reina Del Pacifico, so I did a little digging. 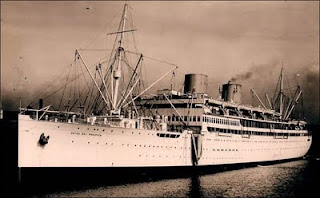 She was, in fact, built in 1931 in the same Belfast shipyard which built the Titanic some thirty years earlier (Rookie, please note how this totally unnecessary sentence works in my weekly reference to the Titanic). She was built specifically for the Pacific Steam Navigation Company which, somewhat confusingly, concentrated on transporting people across the Atlantic and between various ports in South and Central America. As traffic began to contract in the 1930s and 40s, the line turned more and more to cruising and holiday work ; its usual range of destinations suiting the market well. Indeed it was on the 9th November 1937 that the former British Prime Minister, Ramsey MacDonald, dropped dead of a heart attack just after dinner whilst crossing the Atlantic on the Reina (and there goes my weekly reference to some long-dead dusty British politician).
But going back to the original postcard I was slightly intrigued by the inclusion of a visit to "Robinson Crusoe's Island". Of course, I knew all about Robinson Crusoe and how he was a castaway on a desert island, but how could a fictional character give rise to a real island. A paltry bit of research revealed that the story, by the early eighteenth century writer Daniel Defoe, was based on the real story of the Scottish sailor Alexander Selkirk, or was, for four years, marooned on the uninhabited island of Más a Tierra. Más a Tierr - which somewhat paradoxically means "closer to land" - was one of the three islands in the Juan Fernández archipelago, situated 674 kilometres west of South America in the South Pacific Ocean. In 1966 its Chilean owners rather sweetly renamed it Robinson Crusoe Island. 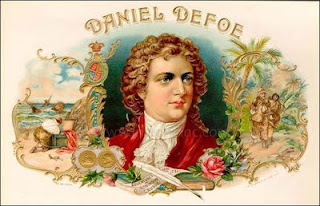 But before I leave Defoe and his famous book I need to mention a little-known fact. It appears Defoe started writing the story in 1712 whilst he was living in a pub - The Rose and Crown - in Halifax (a double-whammy this, mention of Halifax and pubs in the same sentence). At the time he was hiding out from the law - a little matter of an accusation of treason - and although he didn't complete the book until a good few years later, it could just possibly have been started over a pint of Websters Best Bitter in Back Lane (brewing historians will understand that there is an element of dramatic licence in this sentence as Samuel Webster was still a gleam in his great-grandfathers eye at the time).
Come to think of it, I don't think I've ever read Robinson Crusoe. That can be the first candidate for my Holiday Book Bag short-list, all I need now is a few more nominations from you. So, you see, I got where I wanted to go. Eventually.
at November 09, 2009