Postcard Of The Week : Life Before Bettys 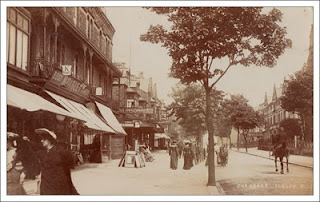 My vintage postcard this week features a picture of The Grove in Ilkley, Yorkshire. To readers who know this part of England, the street and buildings might be familiar as today it is the site of the Ilkley branch of the famous Bettys Tea Rooms. However the picture featured on the card (which was published by the Ilkley stationer, M A Procter) pre-dates the arrival in England in 1919 of Frederick Belmont, the Swiss founder of the Bettys chain of tea rooms and shops. It is worth clicking on the above picture to enlarge it as there are some wonderful details visible in the photograph which must date back to the early 1900s. Nobody is quite sure why the tea shop (and later the chain of shops) was called Bettys :  there are several fascinating possibilities described on the Bettys website. The website is worth a visit as it contains lots of mouth-watering information. An up-to-date photograph of The Grove shows that whilst the shop frontices may have changed, the basic structure of the buildings remains the same. 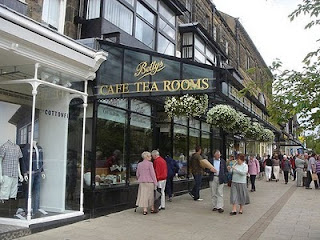 I think the postcard (which has not been postally used) comes from my own collection rather than that of Uncle Fowler, but by now the two are inseparably blended : like a good Yorkshire tea.