Sepia Saturday : The Curious Case Of The Milliners' Wedding 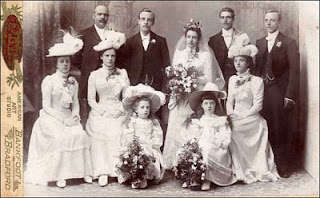 The decision about the first photograph I should submit for the new Sepia Saturday blog was a fairly easy one. It is one I have used a lot this week as it is the one I chose as the header for the blog itself. I have featured it on News From Nowhere before and explained a little of its background. But that was back in 2008 when the only followers I had were my friends Jane, Edwin and Mark and my dog Amy. So I will simply reprint the earlier post and send my apologies to J, E and M. I don't apologise for repeating myself to Amy because I sometimes suspect that she doesn't listen to me as I read out my daily draft posts.
THE CURIOUS CASE OF THE MILLINERS' WEDDING
Irrespective of anything else, this is just a gorgeous photograph. Again it came out of one of those boxes of old photographs which are handed down. There are no firm details as to who the subjects of the photograph are other than a scribbled note in pencil on the back which states "Harry's Father". I must confess that the handwriting looks suspiciously like mine and therefore it appears that at some stage, I half identified the happy couple and then abandoned them to a fate of dust and scratches at the bottom of a old cardboard box. For this I feel guilty and I am therefore determined to make some amends. I need to track down the details and release them to the waiting world. It will be like one of those wedding reports you see in the local paper. The difference will be that it will be a little late in appearing (as it turns out, 108 years late).
The Harry was the clue, for as regular readers of the Blog will know, I had an Uncle Harry. He was married to my fathers' sister and was therefore not a direct blood relative of mine. Luckily, amongst the various documents I have accumulated over the years, I have a copy of his birth certificate. He was born in 1903 and his parents were Abraham Moore and Alice Moore (formally Rotheray). So the chances are that this could be a photograph of Abraham and Alices' wedding. The one problem with this is that they all look a little too affluent . Abraham is listed on the birth certificate as being a "Piece Taker In" which sounds as though it is a run-of-the-mill textile process. Could a Piece Taker In have afforded those magnificent hats or attracted a girl from a family that could. The census records suggest that Alice's father was a "Butter Factor" : once again not likely to be able to afford all those ribbons and bows.
The crowning piece of evidence was in the 1891 census records. By now Alice is 16 and her occupation is listed as being a "Milliner Apprentice". We therefore have a possible solution - the hats were stock in trade, borrowed for the big day from the brides' workplace. Whatever the explanation, it does seem likely that it was the wedding of Abraham and Alice which took place in the Spring of 1900. So, a little late in the day, we can finally publish the picture, and the report :
"The wedding took place on Saturday 23rd April 1900 of Abraham, son of Smith and Margaret Moore of Percy Street, Horton, Bradford and Alice, eldest daughter of Thomas and Lydia Rotheray of Smiddles Lane Bowling, Bradford. The bride wore a dress of starched white silk ....."
VISIT THE OTHER SEPIA SATURDAY PARTICIPANTS BY USING THE LINKS ON THE SEPIA SATURDAY BLOG
at February 13, 2010