Sepia Saturday 19 : Mirth, Enjoyment And Something Else 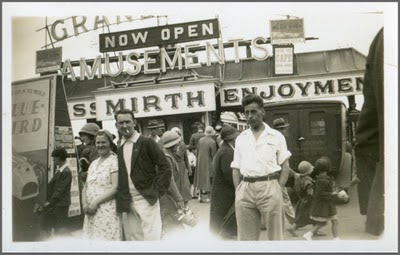 One of the great things about old photographs is the opportunity they provide for micro-analysis. My Sepia Saturday photograph this week is a picture of my Uncle Frank and Auntie Miriam (the couple on the left just in front of the "Mirth" sign) in Weston-Super-Mare. The picture must have been taken in the early or mid 1930s and it features the entrance to the Grand Pier at Weston. Who the shirt-sleeved chap on the right is, I have no idea. It is one of those photographs you can examine for ever. Look at the clothes, look at the hats, look at the posters. A number of the posters advertise an exhibition featuring "the fastest car in the world", Bluebird. This will be the car with which Sir Malcolm Campbell held the world land speed record at various times between 1927 (when the record stood at 206 mph) and 1937 (by which time he had nudged it up to 301mph).
The old pier kept going right into the 21st century but was very badly damaged by fire in 2008. It is currently being rebuilt and is scheduled to re-open later this summer. With the wonders of the internet you can read the story of the death and rebirth of the pier on the pier website and even view construction work via the pier webcam. But the one question that the website can't seem to answer is about that very prominent banner that features in my photograph. It promises visitors mirth, it promises visitors enjoyment ... and it promises visitors something else : but what? The word obviously includes the letters SS but what was it? There is a prize of an old British penny (to use in the slot machines once the pier reopens) to anyone who can solve the mystery.
GO TO THE SEPIA SATURDAY WEBSITE FOR LINKS TO OTHER SEPIA SATURDAY POSTS.
Note :  Over the weekend I will try and track down the glitch that is making News From Nowhere slow to load in Internet Explorer. This might mean that, at times, the blog has a strange look about it. These will be temporary changes and we should return to a more settled look before too long.
at April 17, 2010