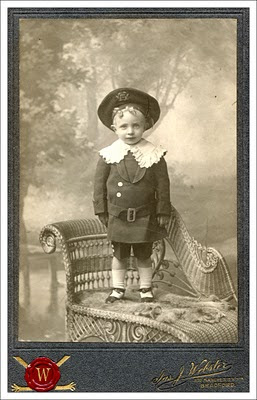 According to a scribbled note on the reverse of this photograph it is my Uncle Harry. He is about three years old in this picture and, as he was born in 1903, that dates the picture at about 1906 which sounds about right. Regular readers of my Sepia Saturday postings will already be familiar with Uncle Harry : he was one of the co-stars of my Sepia Saturday 13 : Walking Snaps, and it is his parents whose wedding features in my "Curious Case Of The Milliners' Wedding" and serves as the header for our Sepia Saturday blog.
I have already written fairy extensively about Harry Moore. At various stages of his life he was a professional musician, but he led a troubled - and I guess fairly tortured - life. Today I want to focus on just one of my memories of him. It must have been the late 1950s and I was on holiday with him and his wife (my fathers' sister Annie). We were staying at a caravan park at Hornsea, south of Bridlington on the Yorkshire coast. Harry and his drummer Geoff had picked up a week's work at the Social Club which was part of the Caravan Park complex. Each night they would entertain the holiday-makers and back any visiting singers that might be appearing.
At that time the second television channel (Independent Television) had just started in Britain and in Yorkshire there was an evening local news programme called Calendar (it is still running, fifty-odd years later). Each week they would feature local musicians who were given a slot at the end of the programme. This particular week they were featuring Harry and his partner Geoff and the piece was being filmed in the Caravan Park Social Club. I must have been about 10 years old, and I can distinctly remember being allowed to sit at the back of the Club and watch the recording take place. But the thing I remember most was the bright yellow shirts that both my Uncle Harry and his partner were wearing. They were told to wear these by the production staff because the lights being used and the monochrome television cameras would make the shirts appear white.
I remember Uncle Harry being very impressed by this. His belief that his bright yellow shirt would be his passport to fame could have illuminated the set on its own. But it was not to be. Fame never came. His memory is now kept alive, not by recording contracts and archive film, but by this little photograph of him in his youth, dreaming perhaps of the fame and fortune to come. Maybe he would have been better wearing a sepia shirt.