Theme Thursday : Bicycle (Made For Two)

I know I have been posting a lot of old photographs lately, but when I saw the subject for Theme Thursday this week, I couldn't resist what is perhaps my favourite photograph of my mother and father. 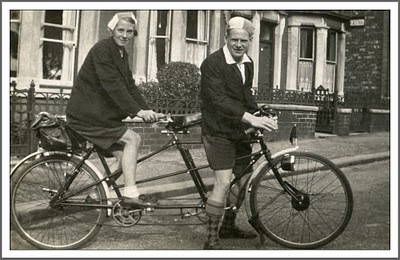 Back in the 1930s, my parents were keen cyclists and each weekend they would go off on their tandem, touring the roads of northern England. My mother always used to tell the story of how, one particular day, she got a little saddle-sore and, when they stopped at a red traffic light, she dismounted to stretch her legs. The lights turned green and my father, not noticing that half the motive power was absent, peddled off into the distant, leaving my poor mother sobbing on the curbside. My father used to claim that he got at least three miles down the road before he noticed any difference at all. 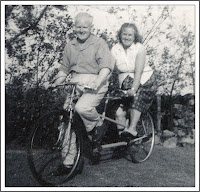 Some thirty years later my brother bought a tandem and I managed to get a photograph of them both with it : although they never rode anywhere on it. By the late 1930s their tandem had given way to motor-bikes - and at one stage a motor-bike and sidecar. In the 1940s, us children came along and my father was confined to the bus, but in the fifties he worked his way up through a motor scooter, an old van and eventually a car.
All this talk of a bicycle made for two reminds me of one of my favourite film clips of all time. It is towards the end of Stanley Kubrick's 2001, and HAL the computer is nearing the end of his time. But why did he sing "Daisy" in that unforgettable way? I have found a short clip which explains why, so, as I ride off into the distance, I will leave you with that.