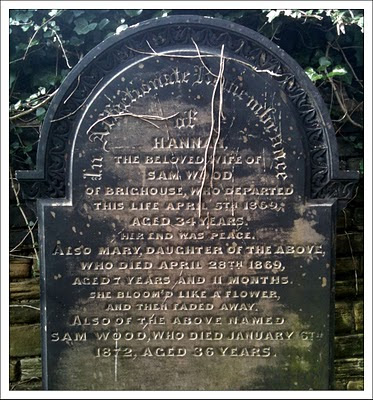 "You're a strange man", my son said to me the other day. He said it with a practiced delivery which made me think it was a phrase he had used about me often, particularly when talking to his friends. "What about your father, Alex, what's he like?". "He's a strange man". That kind of thing. Alexander is at home at the moment, revising for his Year 2 exams and as he reads through his lecture notes on neuropathology and the like I can see him giving me sidelong glances which makes me wonder whether I might represent his first successful diagnosis. Perhaps he will write me up as a case study "Alan Burnett : A Strange Man".
The thing that brought about his comment the other day was a simple and well-intentioned invitation. It was a pleasant Spring day and I thought he might have spent too long indoors pouring over his text books so I invited him to join me in a little trip out. "Where are you going?", he said. "To a graveyard", I replied. "Why?" he asked with considerable emphasis". "Just to look at the gravestones", I replied with measured logic. "Whose gravestone?" his question was now flavoured with exasperation. "Nobody in particular, just looking to see what turns up", said I. "You're a strange man", said he bringing the conversation to an end and returning to his books.
It is all the fault of the delightful JamaGenie over at the Saturdays' Child blog : she's the one who got me interested in gravestone watching. She does this wonderful Tombstone Tuesday thing where she will focus on a gravestone and the story of the person or persons therein. There is a randomness about it which I like - almost like opening a book at any page and beginning to read. The gravestone I chose last week was the one illustrated above. The inscription is as follows:
In Affectionate Remembrance of Hannah, the beloved wife of Sam Wood of Brighouse, who departed this life April 5th 1869, aged 34 years. Her end was peace. Also Mary, daughter of the above who died April 28th 1869, aged 7 years and 11 months. She bloom'd like a flower, then faded away". Also of the above named Sam Wood who died January 6th 1872, aged 36 years.
So what story have we here?  What brought about the death of mother and daughter within a few weeks of each other. As I walked around the graveyard I came across quite a few graves of people who had died in the Spring of 1869 so one can imagine that there was an outbreak of disease, although I have yet to discover what. From the census records it is clear that Sam married again shortly after Hannah's death, and his second wife was also called Hannah. A daughter from his marriage to Hannah I survived (Amelia) and a son (David Neil) from his marriage to Hannah II seems to have survived and later been adopted by a family in Halifax. But the precise story is unclear and further investigation is called for.
I thoroughly enjoyed my trip to the graveyard. Like the gravestone of Sam Wood, it was dark and mysterious. And - call me strange if you must - but I quite like dark and mysterious.