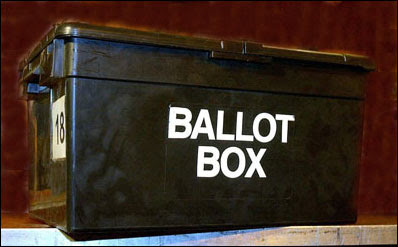 Isn't it strange how two unrelated things can come together - two thoughts, two ideas, two memories - and set off a chain reaction that leads to .... well to who knows where? In the case of the Large Hadron Collider some people think it might be to oblivion. In the case of the two wood pigeons that are currently making a dreadful noise in my garden it might be a nest full of eggs. But in the case I am more immediately concerned with, it is a severed head dripping with blood.
The first ingredient in my somewhat gory recipe is politics, and to be more specific, general elections. It is fairly difficult to escape the upcoming General Election here in Britain : the media are full of it and there has been an outbreak of pointless posters on bill-boards that can rival the veracity of Swine Flu. The second ingredient is a much more welcome one : Theme Thursday. This week the theme is box, and for me it reacted with the all-pervading political milieu and quickly led me to a ballot box. A heavy-duty infusion of reminiscence took me back to the second election of 1974 (the political analysts amongst us may want to recall that this was the last time we had a hung parliament here in the UK and draw suitable conclusions).
I was young, I was enthusiastic, and I was living and working in London. I was employed at the headquarters of the Labour Party and my job was to try and get Harold Wilson returned as Prime Minister and this time - unlike the first election of 1974 - with a working majority. It was my first General Election since I started working at Transport House (the Labour Party headquarters) and the excitement of it was intense. The building was crammed with senior politicians and celebrities and those representatives of the world media who were not camped inside, were camped outside. The phones rang constantly, there was an endless list of tasks to be undertaken and normal working hours had been abandoned for the duration. The flurry of activity swept you forward like an adrenaline induced tidal wave, and then dumped you, becalmed, adrift, unnecessary on election day. Then there is nothing more you can do. Campaigning is over. You just sit and wait for the results.
So there I was, on Thursday 10th October 1974, twiddling my thumbs and chatting to another Labour Party employee. Our conversation took a depressing turn as we speculated what might happen if we lost the election. So we went to the pub across the road. To stave off depression we drank beer and made plans for our post-political careers. In a semi-drunken stupor we decided to become thriller writers and there and then plotted our first book. It would be a crime thriller with a political twist. It would start on the day of a general election. One of the first things to occur on election day is that the ballot boxes are sealed and this takes place in the presence of representatives of the political parties and, often, the candidates themselves. The ballot boxes then have a police guard throughout the day before been taken to the count which usually takes place in the local Town Hall. There the ballot boxes are handed over to the Returning Officer, the seal is broken, the boxes up-ended and the resulting pile of ballot papers are counted.
The action in our plot centred on the constituency of an up-and-coming Conservative MP who was destined for high office if they won the election. After observing the sealing of the ballot boxes in the morning he had mysteriously gone missing during the course of election day. His Party officials put it down to the exhausting campaign and felt confident that he would re-emerge in time for the counting of votes that evening. The count started but the candidate was nowhere to be seen, but his absence was overshadowed by the excitement of the count. Ballot box after ballot box was carried in, the seal broken and the ballot papers tipped out. Everyones' eyes were focussed on the lines of stacked and sorted ballot papers, trying to pick up a clue as to the result. The last ballot box was opened and the votes tipped out. There was something seriously wrong with the voting papers, they were blood-red and stuck together in a gelatinous mass. The counting staff gave a final tip to the box, and out rolled the severed head of the Conservative candidate. The key problem we faced in writing this obvious best-seller was "how was it done" : how did the severed head get into a ballot box which had been under constant guard. As day merged into evening and pints merged into whisky's my companion suddenly declared "I've got it, I know how it was done". Alas, at that point they called us back to work as the election results were coming in
In the real election, there were no severed heads and the Labour Party managed a small overall majority. Harold Wilson would remained in power and we kept our jobs. A career change wasn't necessary. We decided to put off writing the novel until we had more time. I lost touch with the other chap years and years ago and he never did tell me his proposal for a solution to the mystery. I would have forgotten about our draft plot (perhaps that should be our daft plot) years and years ago if it hadn't have been for a strange confluence of politics and boxes. Maybe the time has come at last to take the project on. Let's wait and see what happens in the election first. And let's wait and see if I can manage to work out how the head got into the bloody box in the first place.