Postcards From The Pond 4 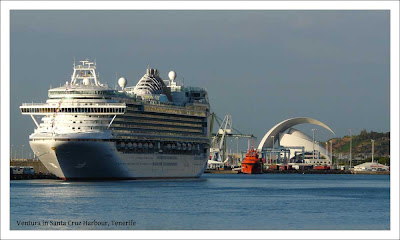 There is something rather majestic about travelling by sea. Moving at a constant 20 knots (or whatever it is we move at) gives you a chance to appreciate distance, and gives you a feeling of achievement almost akin to having propelled the vessel yourself. It is necessary to emphasise the word “almost” in the last sentence because the thought of my fellow three thousand or so passengers being lashed to the oars and pulling to the beat of a sweat-encrusted task-master is not an easy thought to conjure with. In the main - and with certain exception of which H is a prime example - we are a sad lot as we hobble or waddle from restaurant to bar supported by a metallic forest of aluminium canes and walking frames. But given the average age of the passengers - an average which makes me feel like I have miraculously entered the first year at junior school again - we represent the victors in some convoluted genetic experiment. We - the grey, the bent, the portly and the slow - represent the winning number in life’s’ lottery : or that is what I tend to declare somewhat noisily after I have downed my last Speckled Hen or Marston’s Pedigree of the night.

The series of strange events that have beset our little party continues apace. Not only has our group portrait gone missing from the photographic studio (bought by a stalker according to H’s expert opinion) but over the last 24 hours our door keys have stopped working with alarming regularity. And this morning, as we pulled away from the port at Santa Cruz on a motor coach bound for a tour of a mountain or a forest or a shop or something, I distinctly spotted someone waving us off from our cabin balcony. E suggests that I should incorporate these various events into the Great Novella but they won’t easily fit in with the plot so the only alternative is to book another cruise so I can write another story.

As I write this, the ship is at anchor and the city of Santa Cruz is just a short walk away. But I miss the feeling of movement I have got used to over the last four or so days. But I need not worry, in an hour or so we will be under way again, faced with five full days at sea. The next land we see will be the Caribbean Islands (or Bognar Regis, depending on the navigational skills of the First Officer). But now I must go, strip off my clothing to the waist and yet again take up those oars in my callused hands. It’s a hard life.
Yours (to the beat of the task-masters drum), AB.
at October 26, 2010