The Hills Are Alive With The Sound Of .... 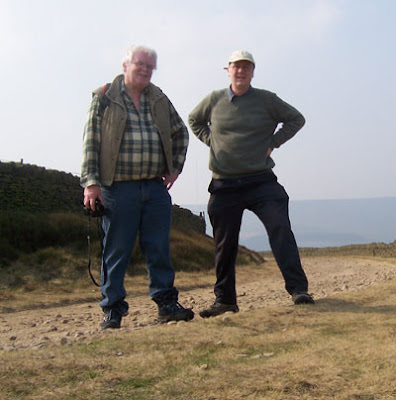 "152", Mark said with professional distraction as his eyes swept the hazy detail of the Holme Valley, way below us. He didn't fool me, I knew he was desperately trying to locate the nearest Cottage Hospital. "Is that good or bad?", I panted. The words escaped amidst a spate of heavy breathing that would have done justice to the male lead in a pornographic film. "Well, good actually", he replied with just a tad less conviction than I would have liked. He went on to explain about the benefits of exercise which gets the pulse racing, the muscles aching, and the sweat dripping. Most of it passed me by : I was too busy fighting for my next breath.

Last week, my friend Mark had phoned to say that he had a few days off work and would I fancy going for a walk followed by a spot of lunch and a pint. I could choose the itinerary and the pub. I jumped at the chance of a day out walking the hills, breathing good Yorkshire air, drinking good Yorkshire beer. What was more, my wife couldn't veto the adventure on the basis of it placing too much strain on my frail, unfit, and overweight body : I was taking my own personal physician with me. The day dawned well : a morning mist gave way to a beautiful bright Spring day. We set out from the car park at Digley Reservoir and headed up a country lane. We were due to turn off the lane onto a footpath after a couple of hundred yards. By the time we got to the turn-off I had realised that I had made a dreadful mistake.
Mine is a body made for virtual exercise. I am a natural observer rather than a participant, and my preferred location for observing is the comfort of an armchair. But here I was facing the prospect of a five mile walk having just discovered that my lungs were no longer big enough to service my body. An hour later we were two-thirds of the way up what must be one of the still undiscovered mountains of the Western World. The guidebook told us to keep walking until we got to the top. Every time I thought we had eventually reached the peak, Mark would happily announce that there was only a few more yards to go. I became convinced that we had reached an altitude where oxygen starvation was a serious threat. I made a grab for the water bottle and collapsed on the ground. Mark took my pulse and declared me fit to continue. 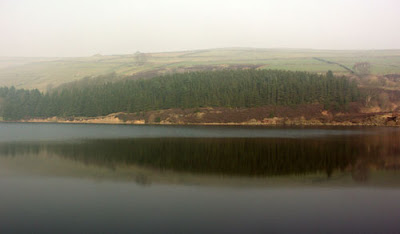 We eventually reached the top. The views were magnificent. The colours would have done a Dulux Colour Chart proud. After a further hour we reached the pub and the pint tasted like the pint of your dreams : creamy, full-flavoured and marvellously refreshing. It was a very agreeable day. A day which will live long in the memory. The hills were alive with the sound of my racing heartbeat and, as Mark said, that's a good thing.
at March 28, 2007