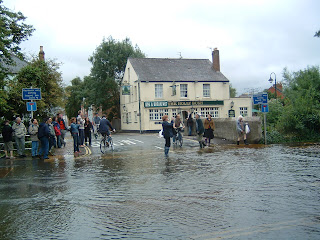 It's not every day one finds the world's media at the bottom of the road. (Though the BBC News did do an item on recycling from Jericho the other week) Anyway, this time it really was the world's media - Sheila in Weirs Lane was interviewed by Dutch TV, and the blue BBC helicopter was overhead all afternoon - so I couldn't resist going down to Osney. We thought they might not let us, or else that there'd be crowds of people, but in fact there weren't that many, and almost all of them were standing in front of a camera or passing a report down a mobile phone, or interviewing someone. I played journalist and took photos and a video of the water charging past Osney Mill until my camera card was full. 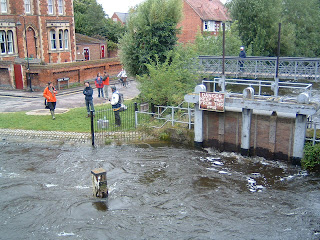 We did find some floods. I paddled in one (though not on purpose). And the River Thames was scarily fast, though it still seemed to be an inch below the bank. The flooding was actually caused by the streams that make Osney an island overflowing into the neighbouring streets. The best bit was the weir by the lock, which is scary at any time, plunging like Niagara into the pool below, only this time it wasn't falling, because the river level had come up to that of the lock channel. The lock itself, quite a deep one usually, was the same either side. And those high posts one moors up against, - you could just about see their tops sticking out of the water. We're used to sailing our boat down here at this time of year, for heaven's sake! AB was right, it must be Armageddon .
at July 25, 2007