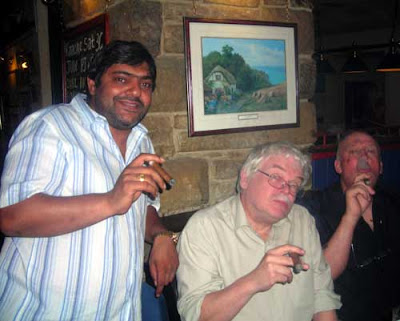 There were more cigars than in your average humidor. There were smoked ham sandwiches and smokey bacon crisps. The jukebox played Smokey Robinson and Smoke Gets In Your Eyes. It was the end of an era. Saturday night was the last night when it was possible to smoke in public in England and to mark the occasion at the Rock Tavern we held a bit of a SmokeFest.
Perhaps the most surprising thing about the introduction of the ban has been how little resistance there has been. There is the odd attempt to get pubs designated as foreign embassies, or hospices (both of which are exempted from the ban), and a couple of cases taken to Human Rights' courts, but in the main smokers have rolled over and taken it meekly.
I don't want to get into the debate about whether the ban is right or wrong from a public health perspective : it is not an interesting debate and now that I am retired I don't have to waste my time with such things. The thing which worries me about the ban is that, in effect, it is another powerful move towards individual isolation. It is a ban on smoking in public places - by definition places where people gather together. Places where people come into contact with people of different backgrounds, different ideas and different perspectives. The pubs, clubs and bingo halls that will be affected by the ban are part of the vital superstructure of society. Without them people sit at home. Drink at home. Smoke at home. Their view of the outside world is achieved via a media window. Interesting people are no longer people like Old Jack - who has been coming down to the club for forty years and was on the North Sea convoys during the war - but so-called celebrities who have the substance of tissue-paper. Differing opinions are no longer the beer-stimulated, smoke-encrusted arguments that have taken place in many a Tap Room but what the Sun says on Page 2 compared to the slightly different view it gives on Page 7.
No doubt within the next few months there will be many a study which says that we are healthier because of the ban. They will say that we will probably all live longer. And as we sit in our bubble-wrapped front rooms passively listening to the television, it will certainly feel longer.
at July 03, 2007