Back from holiday (two weeks at high sea plus a bonus week back on land) and I am full of projects. These silly little projects give structure and form to what could easily become the nebulous existence of the prematurely retired. And anyway, I have always been a project-person. I can't look at a tree without wanting to categorise the most common tree shapes, I can't eat a bag of crisps without an accompanying deep desire to write a short treatise on the history of potato crisp making in the UK (Did you know that Henry Walker, who was by trade a pork butcher, only went into crisp manufacturing when wartime rationing meant that he sold out of his allocation of pork by 9.30am each morning?).

Blue-tacked to the underside of my desk is a list of my current projects (I don't want people seeing this, they might get to thinking that I was a little strange or even a little sad). There at the top of the page are the three great on-going projects : Fat Dog To The Big Apple (Amy and I are just starting the second leg of our epic journey and heading north from San Francisco); the Daily Photo Blog (a mixture of new and old photographs from my collection); and, of course, News From Nowhere.
Since returning from holiday, two new projects have been added to the main section of the list, and one has been pencilled-in within the "under review" section of the list (note how even the list of projects has itself become a project). The first of the new additions is an old idea of mine which I have never quite got around to completing. With the working title "Typically Yorkshire" it attempts to answer the question "what is a typical Yorkshire scene?" by making use of geographical co-ordinates and random number generators. It might make an interesting little article, and if not it will provide me with a little diversion from filling and re-filling the dishwasher. I will report on my progress from time to time, at the moment let me simply say that the random number generator has decided that the first place I investigate is a field just south of the hamlet of Nunburnholme Wold, a few miles east of Pocklington.
The second new project is a refinement of an idea that I wrote about before going on holiday - the 100p challenge. In order to give some meaning to my life I have decided to drink 100 pints of beer in 100 different pubs during the next year (let me stress that is 1 pint in each of 100 pubs not 100 x 100). I see this challenge as being in the great tradition of people who have attempted to scale the highest mountain on each continent, or walk 10,000 steps each day, or ski down every rabbit hole in Central America, or whatever. I might seek out sponsors (they could have badges saying "I bought Alan a pint in one of 100 pubs") or I might steal a beer-map as a souvenir from each of the 100 pubs. "Where is the challenge in this task?" some doubters may cynically ask. Sadly, the challenge is still finding 100 pubs still open. 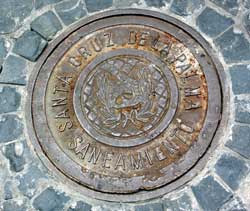 The pencilled-in addition to the "under review" section is my planned magnum opus "Great Manhole Covers Of The World : An Illustrated Encyclopedia". The only thing which stops me going ahead with this is the fear that it might appear somewhat eccentric. I must continue to try to fight against this fear, as I believe that it could represent my most realistic claim to lasting fame. With this fight in mind let me close today with a splendid example I captured during my recent visit to the Canary Islands. Take in its fine cast-iron beauty and ask yourself, what's so eccentric about that?
at August 27, 2007