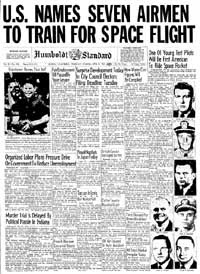 Just how many defining moments are there in a person's lifetime? In asking this question, I don't mean personal defining moments - the birth of a child, the death of a parent - but those moments when something happening in the outside world has such an impact on us that it leaves an indelible impression. These are the moments when, forever afterwards, you are able to say what you were doing the precise moment you first heard the news.
I was started on this thought process by one of those "Today in History" features I am so fond of. Forty-nine years ago today the American Government published the list of airmen who had been chosen to become the first group of "astronauts". From amongst the so-called "Mercury Seven" would inevitably come the first American in Space. I looked at the list of familiar names but had difficulty in remembering which of the seven went on to don that crown. Have a try yourself : M Scott Carpenter, L Gordon Cooper, John H Glenn, Virgil I Grissam, Walter M Schirra, Alan B Shepard, and Donald K Slayton. The first American in Space found his way there on the 5th May 1961. My difficulty in remembering his name is because that was not a defining moment. But what happened 23 days before was. 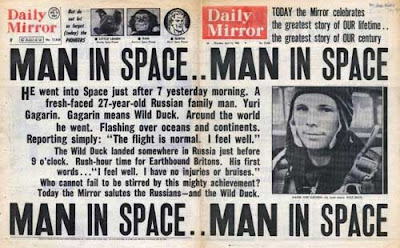 On the 12th April 1961, Yuri Alekseyevich Gagarin became the first man in space. I discovered the news as I was heading home from school. I changed buses in Halifax and there, on a newspaper bill-board outside what used to be Whittakers' Brewery, was the placard "Man In Space". I checked my pockets to see if I could put together enough money to buy a paper. Between us, me and Malcolm Stocks had enough coins, but the newspaper seller had long since sold out and therefore I had to wait until I got home to see the reports on television news.
It must have been my first defining moment. I had lived through things like the Suez crisis and the Cuban revolution, but I can't remember them from an individual perspective. It was, of course, the first of several defining moments. By there very nature, such moments must be the shared experience of millions and millions of people: the assassination of John F Kennedy, the first man on the moon, the death of Elvis, that car crash in the Paris road tunnel, 9/11. They are markers, not only in the history of our lifetime, but also in the history of our lives. The fact that so many of them are tragedies makes one reluctant to ask : "when will be the next?".

The first American in space was ...... Alan B Shepard.