The Web Is Dead, Long Live The Dentist's Waiting Room 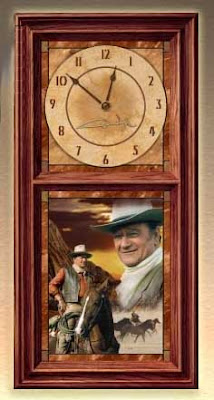 Help me! I am fighting against the desire to order a John Wayne Timeless Hero Collectable Wall Clock (an impressive stained-glass wall clock which honours the 100th anniversary of John Wayne’s birth, and lights up from within at the flip of a switch!). I know that I cannot justify the expenditure of £100. I know that it will not fit in with the overall decor of our house (dog-flea and teenager). I know that some of my friends might think it tacky. But, for some reason, I would so like one (the stained-glass effect continues onto the elegant clock face, which is graced with John Wayne’s replica signature in 22-carat gold).

I blame my dentist. I was sat in her waiting room the other morning trying to take my mind off the smell of mouthwash and sound of pain. I leafed through one of those magazines you only find in dentist's waiting rooms. And there it was, in full colour, in all its splendour : the John Wayne Timeless Hero Collectable Wall Clock (a precision instrument, this exceptional clock boasts accurate quartz movement and graceful hands, surrounded by the warmth of walnut-stained wood). No rubbish this : read those words again - quartz movement and walnut-stained wood. Could it be that when faced with the impending pain and discomfort of the dentist we are more susceptible to advertising? Does fear make for a good selling environment? There is plenty of scope here for a decent research programme which could help to establish the credibility of many a new university. If the link between fear and susceptibility to tacky adverts is proven, then the scope is endless. Doctors' waiting rooms, police stations, solicitors offices, portraits of Margaret Thatcher - all would become prime advertising sites.

Google has a site where you can pitch money-making ideas to them. According to news reports today, Google is having some problems maintaining the spectacular growth rates of its advertising revenue. Clicks on Google's sponsored links in the US slowed from a growth rate of 25% in the fourth quarter of 2007 to just 1.8% in the first quarter of this year. Don't fear Oh mighty Google-God. Let search engines be a thing of the past. The web is dead, long live the Dentist's waiting room. If Google like the idea they don't have to pay me. Just send me a John Wayne Timeless Hero Collectable Wall Clock (hand-fired stained glass creates jewel-like colours that will endure as an inspirational tribute to John Wayne).
at April 18, 2008