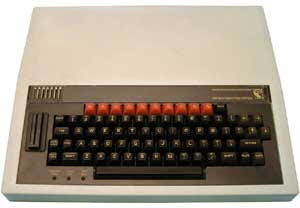 I will never forget my first love : what man will? The excitement, the expectation, the thrill, the realisation that you have progressed through a new portal of existence. And mine was a BBC Micro.
It was twenty-five years ago. The Beeb was not the first computer I had come into intimate contact with - we had an early Apple at work which was bolted to an old canteen trolley and wheeled between lecture rooms - but it was the first computer I had owned. Thus it was the first computer I could explore with abandon, the first computer I could share the early hours of the morning with, the first computer I could play with. Like all first loves, it was beautiful with its red and black keys and its fawn plastic case. Later computers were more sophisticated, more ergonomic, more practical, but the Beeb had that flush of impetuous style that only the young are capable of.
The things it could do were almost beyond imagination. It could justify type (this may not sound much but for some of my publications I used to do this manually by typing a piece, counting how many extra spaces would need to be added to each line to make the right-hand edge straight, and then re-typing the piece with the spaces in). It could construct crude pictures by putting together a complex pattern of the letter "x". It could play music, and - with the addition of a little programme - it could talk. It could play wondrous games such as "Elite", "Space Invaders" and the glorious "Mr Ed" (which I still occasionally dream about). You could programme it (actually you had to programme it because it could do nothing by itself). Within a few hours of it coming into my life I had taught it to type "Good Morning Alan" when I switched it on. The book said that you could teach it to use "morning", "afternoon" or "evening" as appropriate, but I never progressed that far.

My Beeb and I lived together for two or three years until I fell for an Amstrad 1512. This was newer, more powerful, more serious ....... but it wasn't the same. If you asked me to was lyrical over an Amstrad I couldn't. These thoughts and memories were brought into focus this morning by a leader in the Guardian entitled "in praise of the BBC Micro". It came as a bit of a shock to discover that others had experienced love affairs with the same Beeb. But I am not jealous. I am reminded of those lines from Cohen's "Sisters of Mercy"

And you won't make me jealous if I hear that they sweetened your night:
We weren't lovers like that and besides it would still be all right.

My Beeb is packed away in the loft space. I have not visited it for many years. But I will search it out and boot it up again. As they say, "first loves never die".