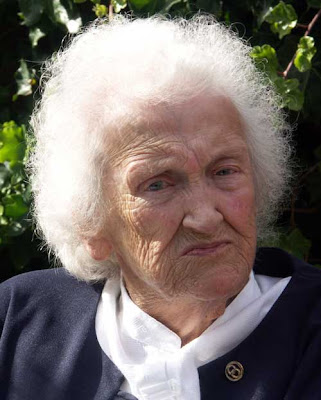 Auntie Rhoda died early on Tuesday morning after a very short illness. She was taken into hospital on Monday afternoon and in the hours before her death she was surrounded by her family. She was 92 years old and will be greatly missed by everyone who knew her.

As we all gathered at her daughter Caroline's just a few hours after her death we shared our shock at her passing. She may have been in her nineties but we were all convinced that she would live for ever. We also shared our memories and the gathering soon became a celebration of her life. And what a life, what a woman.

Rhoda was born in 1915 in Liverpool the second youngest of the twelve children of Charles Frederick Usher and his wife Isabella. The Ushers were a large family - Charles Frederick was himself one of thirteen children - who were ship's fender makers in the Crosby district of Liverpool. Like most large Liverpool families, members of the extended family spread far and wide and Rhoda had Uncles, Aunts, Cousins, and eventually brothers, in countries all over the world.

When Rhoda was born in December 1915, the First World War was at its height : the allies were just about to retreat from Gallipoli and the great battle of the Somme was still six months in the future. She grew up during the 1920s and 30s and as a young girl was a talented entertainer, touring for a time with the Music Hall troupe "The Winstanley Babes" (see A Babe Remembers). But she missed home and she missed her family and soon abandoned the stage and took a job at the "Bear Brand" nylon factory in Liverpool.

She was just 24 when the Second World War broke out. Whilst the earlier conflict had left her life relatively untouched, this new world war would have a profound impact on her. Like so many other young girls she went to work in the ever-dangerous munitions industry and living in Liverpool she had to face up to the constant threat of enemy bombing raids. But the war also brought great happiness into her life in the shape of a young Canadian soldier, Andrew Hamilton Cuthill,who had arrived with the very first contingent of Canadian troops to disembark in England. Andrew and Rhoda were married in 1942 and were together until Andy's death in 1983. She had his photograph with her to the end and when she is buried next week she will be laid to rest next to her beloved Andy. 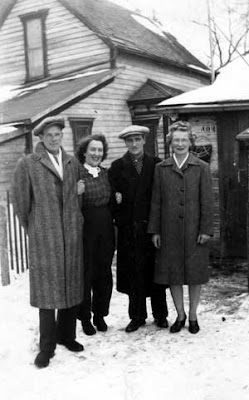 Whilst Andrew saw active service throughout Europe, Rhoda prepared for a new life as a farmers' wife in Canada. In 1945, with her young son David, she set sail for Canada where she met up with her newly demobilised husband. The photograph shows Andy and Rhoda (left) in Canada with her elder brother Sam and his wife who had emigrated ten years earlier. Rhoda and Andy set up home on a farm in Reston, Manitoba. Life on an isolated farm on the cold plains of Southern Manitoba, with no electricity, having to ride horses and milk cows by hand, must have been both strange and challenging to a city-girl from Liverpool : but she coped and - if my knowledge of her later in life is anything to go by - I am sure, never complained. Caroline, a sister to young David, was born whilst they were in Canada. Perhaps it was a desire to do their best by their young family, perhaps it was homesickness, but in 1950, Andy and Rhoda made the difficult decision to return to live in England.

On their return to England they lived, not in Liverpool, but in West Yorkshire where Rhoda's youngest sister Edith had gone to live when she married her husband Raymond after the war. Here, Andy, Rhoda and their young family set about building a new life, eventually being joined by Ada, a third of the Usher sisters and her family. David and Caroline grew up, married and had families and Rhoda soon became the matriarch of a large and loving extended family. Even after the death of Andrew and her sisters she was still surrounded by her family : her children Caroline and David, her niece Isobel, her grandchildren David, Beverley, Lee and Lisa, her great-nephew Alexander, and her great-grandchildren Sinaed, Liam, Aidan, Neave, Chloe, Zachary and Molly. The following photograph was taken just two and a half years ago at the family party to celebrate her ninetieth birthday. 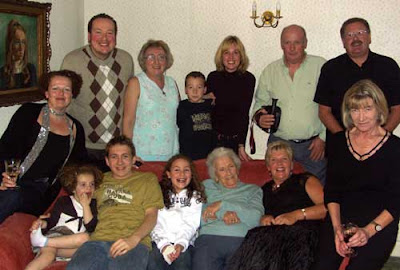 But Rhoda was well known outside the immediate confines of her family. Everyone would have a story about Rhoda, everyone will be left with many memories of her. She could mix with anyone, she was amusing and she was generous. She loved shopping, and she would return from shopping expeditions with the most bizarre collection of garden chairs, china jugs and plastic knick-knacks. But she was never happier than when she was buying something for one of her extended family. She could have a poisonous tongue and her barbed asides, directed, in turn, at practically every member of her family, were a thing of legend. But the very fact that we used to collect such comments, repeat them, share them and endlessly laugh over them, was an indication of how we all felt about her. And we knew that if anyone but herself dared to put down any member of her extended family they would have Rhoda to answer to. Over recent years, a whole new generation of Cuthills, Garforths, Horrocks and Burnetts had grown to know Rhoda which will guarantee that stories about her will be told and re-told for decades to come.

Now she is gone, no family party will ever be quite the same. She leaves a gap in both the family and in the lives of many individuals. But we will never forget her. As we met on Tuesday, just after her death, someone said "if there is a heaven, there will be a bit of bother up there today". True. But there will be a lot of laughter as well. 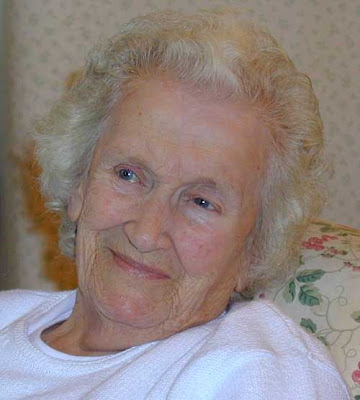