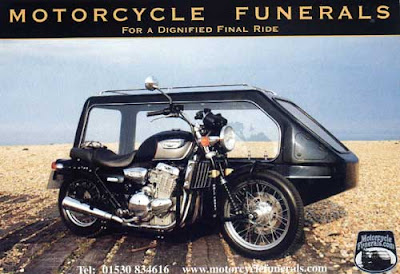 There is little to capture either the attention or the imagination as one waits in the Funeral Director's Waiting Room as I did yesterday at Aunty R's funeral. You never know what tone to adopt in any casual conversation with the other mourners, even if you could figure out who many of them are (one I was convinced was the Undertaker's Assistant turned out to be an old family friend). Unlike dentist's waiting rooms, they do not have a selection of magazines to browse, nor is there one of those television screens carrying adverts for life insurance policies so beloved by post offices. But what I did find was a discreet little postcard advertising a company called Motorcycle Funerals (managing Director, Rev Paul Sinclair) which operates "Britain's first and only motorcycle hearses".
There are a number of things to marvel at here. One is the delightfully eccentric idea that anyone would want to be taken on that final ride in a motorbike side-car, or that this could be described as a "dignified final ride". Funky : yes, different : definitely, but dignified? Secondly, the idea that one should advertise the service in the form of a postcard - with a space for an address and a stamp on the reverse. Who are you supposed to send this postcard to? Your next of kin? Your best friend who has been looking a little iffy recently? And thirdly, the fact that a good inch and a half of the reverse of the postcard is given over to a long list of patent numbers for the "sidecar hearse".
As a lad, I went through a phase of collecting patent numbers the way other kids collected railway engine numbers. Patent numbers could be found embossed in the most unusual places and I could often be found gazing into a public urinal and making a careful note of the patent number. Whilst patent number collecting is not the most popular hobby, its followers are nothing if not enthusiastic. So what finer way to go for an old patent collector than to be taken to the great Patent Office in the sky in a sidecar hearse (UK Patent No. 2 389 824 US Patent No. 7 316 437 European Patent Application No. 03 760 795.9 Designating AT BE BG CH+LI CY CZ DE DK EE ES FI FR GB GR HU IE IT LU MC NL PT RO SE SI SK TR Canadian Patent Application No. 2 525 009). I will be booking mine tomorrow.
at April 29, 2008