Big Jake And The Grim Reaper 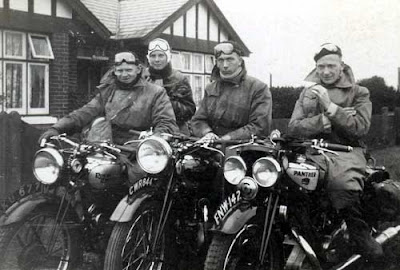 In a comment on my last posting, JGC asks "Am I dreaming, or didn't one of the aunties boast of travelling round in a bike and side-car in her youth? Perhaps it was Annie". Well the answer is no you are not dreaming, but it wasn't one of the aunties, it was my mother. Albert and Gladys were very keen motorcyclists in their younger days. The above picture shows Albert and Gladys (left), Uncle Charlie (who was not an uncle at all but was a family friend and another keen motorcyclist) and an unknown third rider (right). I can't actually find any photographs of Gladys in a sidecar, but I remember her talking about it. However, she far preferred to be on the pillion behind my father, as this made it far easier for her to nudge him in the ribs and order him to slow down, turn left, turn right, or whatever.
I have some sympathy with her. I have only ever ridden in a sidecar twice in my life and both occasions left deep psychological scars. When I was about 14 or 15 I used to be a member of Halifax Chess Club which held its weekly meetings in Spring Hall. Occasionally I would get lifts home with a friend of my fathers' who was also a member of the club, a certain Mr Tchewcheski. This usually meant sitting on the back of Mr T's motorbike - a frightening enough mode of transport in itself - but on those occasions we gave a lift part of the way home to a certain Mr Holmes, I was relegated into a sidecar. Mr T must have been some kind of plumber because I remember the sidecar was always full of pipes, blow-torches and ball-cocks, and I would have to somehow squeeze into a small space amongst this peculiar collection of objects. 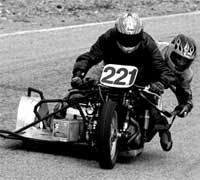 My second sidecar moment came when I was at university. Keele was about two or three miles out of Newcastle Under Lyme. Despite the distance, many students - myself included - would walk into town as the bus service was irregular and we were all poor back in those days. The scourge of such walkers was a post-graduate student called Big Jake. He was a frightening chap : well over six foot tall with scars, tattoos and chains in all manner of places and he road a motorbike and sidecar. Well, to be honest, that is a misnomer as it was one of those racing rigs which is made up of a couple of metal beams attached to a third wheel. It seems that such things are difficult to manage without a passenger and therefore Big Jake was always on the look-out for a suitable volunteer. If you were chosen - you had little choice in the selection procedure - you would not only have to cling on for dear life but also lean at suicidal angles at every corner to act as a counterweight. Normally, only freshers got chosen for these duties as older students learned to hide whenever they heard the unmistakable sound of Big Jake's bike approaching. I got caught by Jake just once, after which I would take evasive action. One of my abiding memories of Keele was watching students dive into the roadside bushes at the first sound of a motorbike anywhere on the roads of North Staffordshire.
So maybe I will live for a bit longer yet. When the Grim Reaper comes for me, complete with his Triumph motorcycle and sidecar hearse, he will never find me. Instinct will have taken over and I will have dived into the bushes.
at May 01, 2008