A E Housman And A Pneumatic Umbrella

It's funny the way my thoughts travel. They don't get a taxi to the airport and jump on an inter-continental jet. Nor do they get an Inter-City 125 Express from London to York. Annoyingly and sometimes wonderfully they favour little old buses: the kind that have been put on this earth to prove that the quickest way between two points is a straight line by showing that the slowest way between two points is a crooked parabola. Take, for example, the case of the poet A E Housman and the pneumatic umbrella. 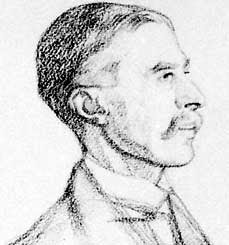 I was listening to BBC Radio 4's Great Lives this morning whilst out walking Amy. The guest was the detective writer, Colin Dexter, and his subject was the poet A. E. Housman. As part of the general biographical background to he poems of Housman, it was noted that his first job after leaving university was as a clerk in the London Patents Office. This would have been towards the end of the nineteenth century which, I suddenly realised, was about the same time that Albert Einstein was working as a clerk in the Swiss Patent Office. Could it be that many of the greatest minds of the twentieth century had all worked in patent offices and was there something about this particular job that improved the mind of otherwise mere mortal men? I searched around the Internet for some time looking for any kind of supporting evidence but, alas, I was unable to find any other even slightly clever people who had worked in patent offices. I have thus filed the theory away in the pending tray of my mind in the hope that further evidence may emerge at some point in the future. 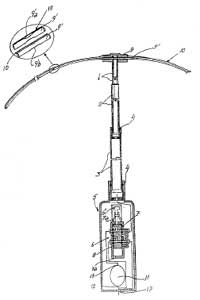 Nevertheless, the Google search had taken me to the website of the British Patent Office (or rather the UK Intellectual Property Agency as it now brands itself) and I was delighted to discover that you can now search through patent applications on-line. What a joy it is to trawl through these flights of fancy and I soon became engrossed in an application for patent protection from a certain Andres Eduardo Chmelik Martinec who recently filed a patent for his invention of a pneumatic umbrella. To quote from the patent application :
"An umbrella with pneumatic activation, specifically a portable, foldable umbrella, for the protection of persons from the rain and sun, and to be employed in fixed installations of one or more umbrellas as well, to protect crops, objects, or surfaces that require controlled protection, outdoor tables, beaches, and patios as principal examples of operation and use with individual or centralized control. When connected together, a group of umbrellas are controlled with a unified command, or through an automated system with temperature and water sensors. An automatic compressor could be provided to activate and deactivate the system, and it also could be activated within a closed circuit with a pressurized air storage chamber. A pneumatic umbrella that, in addition to the handle, or base, has a complete pneumatic circuit with entry and exit of air, equipment for pumping the air, a valve controlling the flow of air to either open or close the umbrella through internal conduits which are connected to extendable stems and are held together by a threaded system".
You must admit, it sounds a wonderful invention and I can see whole banks of Martinec's Patented Pneumatic Umbrellas opening and closing in time with passing rain clouds. It is a vision that could almost inspire you to write poetry. And perhaps it did inspire Housman when he wrote these lines in the volume "Last Poems"
The rain, it streams on stone and hillock,
The boot clings to the clay.
Since all is done that's due and right
Let's home; and now, my lad, good-night,
For I must turn away.
Yes, it seems that Mr Martinec might be on to a winner, But, wait a minute. Didn't Housman write a few verses later:
The skies, they are not always raining
Nor grey the twelvemonth through;
And I shall meet good days and mirth,
And range the lovely lands of earth
With friends no worse than you.
NOTE :
As I am sure you have come to expect by now, you do not just have to passively read these postings you can actively interact by making selective purchases from Alan Burnett's Amazon Store. Why not buy the collected poems of A E Housman or invest in a clear plastic transparent umbrella - as used by the Queen. Just follow the usual links to make me a happy blogger.
at May 29, 2008