Old, Slow, Worn Out and Unable To Multi-Task

Much of my time has been taken up recently with the arrangements for my surprise 60th birthday party. There have been endless lists to make : lists of people to invite, lists of food to buy or prepare, lists of lists to consult and update. I have come to the conclusion that there is nothing like planning a 60th birthday party to make you feel 70 years old. One such list did, however, give rise to one of my finest little jokes for a very long time. We were sat in the Rock Tavern on Friday night and Jenny had just said that she would prepare some potatoes for my surprise party. "Chips" said I more in hope than expectation. "Certainly not" she replied. "OK" said I with an appropriate degree of disgruntlement, "I'll cook some myself". "You can't do that she replied", to which I replied (are you ready for this, concentrate, it's a really good one) : "It's my party and I'll fry if I want to, fry if I want to ...."
Part of the problem is that I seem to be getting slower as I get older. For the last few days I have been doing some heavy practice for the surprise birthday present from Mark and Chrissy which will be an ascent of several mountains in the Lake District. I decided to be sensible and work my way carefully through some staged training and acclimatisation : and I dedicated this week to short strolls up and down the road with walking boots on my feet (the main expedition isn't until next week so I have loads of time to practice things like bivouacking, trekking, rock-climbing and all that sort of thing. I thought I was doing really well, marching up the road with the kind of pace that even the Grand Old Duke Of York would have been proud of. And then a little old lady - in her mid eighties at least - complete with two Scottie dogs said to me "excuse me love, do you mind if we pass you" and I realised that I had been holding her up for ages.
I managed to walk about half a mile this morning and then had to come home because I was worn out. My back was aching, my right foot was beset by a severe pain of unknown aetiology, the rib I cracked a few weeks ago whilst performing a splendid death fall during a game of Murder started to flair up again, my throat was lined with sandpaper, and my nose was running. I came home and collapsed into the chair and said to Xan "I feel worn out". I got his standard reply which was "don't be such an old woman". Thinking of the little old lady with the Scottie dogs I thought "chance would be a fine thing".
The other thing that seems to have evaporated from my list of personal skills is my ability to do more than one thing at once. I am not talking about fairly complex things such as simultaneously translating from French to English whilst reading a newspaper whilst drinking a cup of coffee (I used to watch the translators at the European Commission do this and was always impressed with their ability) : I mean relatively basic things. I have been meaning to do a blog posting since Sunday but my inability to multi-task has got in the way. On Sunday we were all treated to a most sumptuous Sunday lunch by Elaine - every element of which was a true delight (except the Yorkshire Puddings Elaine, except to Yorkshire Puddings). But when I got home I discovered that I could not let this wonderful meal digest and type at the same time. I got up early on Monday to write, but discovered that I could not think and shave at the same time. I started to worry that soon I would not be able to breath and do anything at the same time. And then I realised that I could not worry and write at the same time. 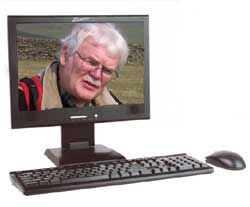 However, none of this has anything to do with what I want to write about which is the perilous state of my computer. It has been playing up for some time now but I have never said anything in public about it because I still intended to try and sell it to Cousin Dave when I eventually got another one. Alas it has now got to such a state that I am going to have to do something about it. After all, it's about four years old which is on the dark side of middle age in computer terms. And it is dreadfully slow at doing anything these days. You could boil a kettle while it finds a web page and eat a four course lunch whilst it launches an application. In its youth it was as swift as an Olympic runner, now it wouldn't qualify for a Veterans Zimmer Frame Race. The truth is that it is getting worn out. The fan next to the CPU makes a dreadful noise, occasionally the screen transposes the colours so everything looks as though you have been on an LSD trip, and the mouse regularly dies and can only be brought back to life by slamming it down onto the desk from a considerable height. And when it was new it could run several programmes at once whilst it calculated pi to 10,000 places and made a reasonable slice of toast, but now it struggles to do two things at the same time. If you try to get it to archive my old e-mail while it checks out the latest football news it transmits its annoyance with a flicker and a frozen screen.
I complain about this endlessly to my wife and she keeps telling me to get a new computer. Until now I have resisted, after all it has been a good friend to me over the years. We've had some good times together and I've told it things I have never told anyone else. But today I realised that you can't afford to be sentimental . Difficult decisions have to be made sometimes. I will pop down to PC World tomorrow and see what is available. The truth is that when such things get old, slow, worn out and unable to multi-task they have to be disposed of. Don't they?
Want an new computer? Then make your first port of call the Computer and Laptop Department of Alan Burnett's Amazon Store. Friendly service and some great bargains. Just press that link and come on in.
at May 27, 2008