Never Too Late For Love.

As many of you know, one of the things I love to collect is postcards - both vintage postcards and also modern ones. I was therefore delighted to be asked to participate in the latest Festival of Postcards which is organised by the Canadian genealogists and postcard collector, Evelyn Yvonne Theriault. A Festival of Postcards is a Blog Carnival - a gathering together of blog posts on a common subject and theme in order to produce a virtual magazine. It is a rather clever idea and it sounds quite simple, but I suspect that there is rather a lot of work involved in the editing and production of the eventual index. The theme for the October issue is "Quadrupeds", and this is my submission. 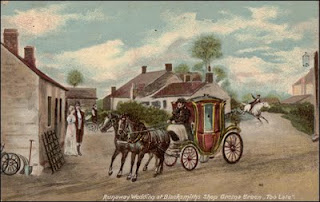 "Too Late" proclaims the title of this postcard which dates back to the Golden Age of postcard collecting - the first decade of the twentieth century. It shows a "coach-and-pair" waiting outside a single story building at the entrance to which stand a bride and groom. Around a corner in the road rides a horseman, waving his arm excitedly : but he is too late. Too late not to attend the wedding but to stop the wedding.

The full title of the card is "Runaway Wedding at Blacksmith's Shop, Gretna Green. "Too Late". Gretna Green is a small village just a short distance north of the border between England and Scotland. Its unique place in social history came about because of an Act of Parliament passed in 1753 (Lord Hardwicke's Marriage Act) which for the first time standardised rules on legal marriages, In particular it stated that if both parties to a marriage were not at least 21 years old, consent to the marriage had to be given by the parents. The law however did not apply to Scotland where it was still possible for boys to get married at 14 and girls at 12 years old, with or without parental consent. This anomalous situation continued for over 100 years - a 21 day residential qualification in 1856 and the minimum age for marriage in Scotland was increased to 16 in 1929 - and during that time Scotland became the chief destination for young couples wanting to get married without the necessary parental consent to do so in England. Speed was usually a necessary factor - these were the days when young girls would be closely confined within the family home - and the young eloping couple would make for the closest point at which they would fall under the jurisdiction of Scottish law. The first Scottish village on the main coaching road between England and Scotland was, of course, Gretna Green.


Almost any building could serve as the venue for a wedding in the eighteenth and nineteenth century, but the most famous venues in Gretna Green were the two blacksmith's shops.All that was required under Scottish law for a legal marriage to take place was a declaration to be made before two witnesses and almost anyone had the authority to conduct a wedding service. The blacksmith's of Gretna Green - the "Anvil Priests" as they were known as - became world famous symbols of young love, elopement and the "forging" of two lives into one.


Even today, Gretna Green is famous for its marriages. Although all of the legal advantages of elopement to Gretna Green are long gone, thousands of couples each year choose the village as the romantic setting for their wedding. The Old Blacksmith's Shop is now a museum but it also still manages to host over 1,000 weddings each year. It would seem that despite social changes and despite legal changes, it is never too late to find a romantic location to forge together the perfect marriage.


TECHNICAL NOTE
Postcard published by N&C as part of the Lochinvar series. Printed in Saxony. Divided back. Probably published between 1900 and 1908. Not postally used but some contemporary writing on reverse.