Japanese Boys And Girls Floating Down The River Calder 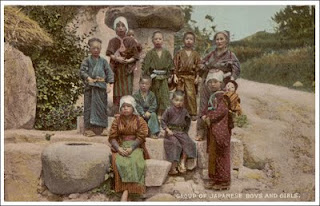 The wonderful thing about old postcards is that you can just pick one from your collection and happily while away an entire rainy afternoon by searching for the story behind it. Take the above card which was published by the fine art publishers Landeker and Brown of Worship Street London sometime between 1903 and 1905. The title is "Group of Japanese Boys and Girls" and it is No. 137 in the Ellanbee Japanese Series. This does not help very much as it would appear that all the cards in the series were given the number 137! The card was used and the postmark is May 3rd 1905. The message is somewhat unforthcoming and simply says "Too-do-loo" followed by five kisses. It is addressed to Miss E Wilson of 57, Denby Dale Road, Wakefield but there is no senders' name. So who sent it and where were they going to?  And strangest of all why isn't either Miss Wilson or the address recorded in the census records of either 1901 or 1911. Indeed if you track down where 57, Denby Dale Road would have been it seems that it is halfway across a bridge over the River Calder. Don't you just love such mysteries. I do.