Amy And I Visit The Battle Of Waterloo 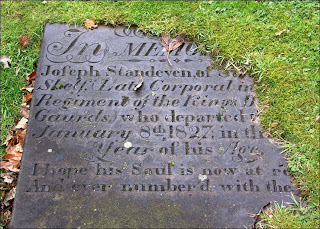 The other day Amy (soft-coated wheaten terrier, licks a lot, thoroughly beautiful and stupid as duct tape) and I (post middle-aged and stupid as duct tape) were wandering around Coley Church graveyard, sniffing at things and minding our own business. Coley Church (for photograph see my Daily Photo Blog) sits in the middle of open countryside surrounded by just a few cottages and is about a mile away from where I grew up and about four miles away from where I live now. In the graveyard we came across the half-covered grave of a certain Joseph Standeven of Shelf (a village about a mile to the north of Coley). From the parts of the gravestone I could read - it somehow would have been wrong to scrape back the turf from the rest of the stone - it appeared that Joseph Standeven died in 1827 and had been a corporal in the Kings Dragoon Guards. I wanted to know more.

If there is anything I love, it is ferreting out information. My love of family history is driven not by the fact that it is my family, but that the individual history of an "ordinary person" can provide a unique insight into historical events. I love family history : anyone's family history. Joseph Standeven was a challenge and the Internet provides ferreters like me with the ideal tool to face up to the kind of challenge we go in search of. The Internet is our lance against the Black Knight of Obscurity.

There was a reference to Joseph Standeven of Shelf in the war service records held by the National Archives in Kew. He served in the 1st Dragoon Guards between 1793 and 1818 and was discharged when he was 42 (and thus we can conclude that he was born in 1776 and he was 51 years old when he died). From the records available in the collection of the Kings Dragoon Guards (now the Queen's Dragoon Guards) we know that the regiment he served in was a horse cavalry regiment and one that took part in the Battle of Waterloo in  June 1815. According to contemporary accounts the 1st Regiment of Dragoon Guards started out in the morning of the battle with "570 sabres" but by the end of the day scarcely 30 soldiers remained alive. Joseph Standeven would have been one of them. 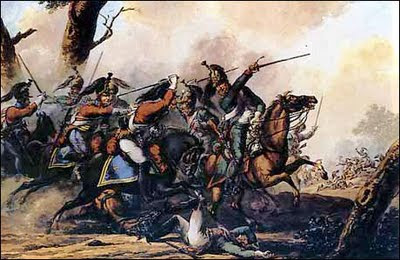 The above illustration shows the Kings Dragoon Guard attacking the French Dragoons at the Battle of Waterloo. How strange to see the turf-covered, long-forgotten last resting place of one of the few members of his regiment to survive that day.